The first responder team at World Weather Attribution have declared that the exceptionally cold winter thus far in the eastern US and and Canada is . . . . . “exceptional in the current climate”. Like, wow. Before we get into the in-depth analysis which has prompted this altogether startling and unexpected conclusion, let’s get the good news over and done with: “good old global warming” didn’t make this extreme cold event any more likely according to WWA.

We also investigated the possible role of circulation changes on the changes in probability, as there have been suggestions that the probability of cold outbreaks has increased due to the smaller temperature contrast with the Arctic. Sea level pressure at 45ºN, 95ºW is most strongly correlated with 14-day cold anomalies in the index regions, and was, indeed, persistently high during the period of the cold wave. This gives rise to the northerly flow that brings Arctic air down over eastern North America. The trend in annual maximum of 14-day averaged pressure at this point has been negative since the late 1970s, contradicting the hypothesis that northerly flows here have increased due to strong Arctic warming. This agrees with reviews of the effect of Arctic warming on the jet stream (e.g., Barnes and Screen, 2015).

So to Michael Mann and others, we ‘sceptics’ must unfortunately feign sympathy and offer our insincere condolences expressed thus: “Bummer”

So nothing ’caused’ this really extreme cold, it just happened, because that’s what weather is like, (though Joe Bastardi made a fairly good prediction months in advance – based on studying patterns of weather). But WWA are at pains to stress that in a warming climate, such periods of intense, prolonged winter cold are, and will become, a lot less likely. Didn’t see that one coming.

So, although this cold spell would not have been unusual before global warming, it is now a relatively rare event in any one region. The chance of a cold wave anywhere in North America is much larger than in this specific location.

‘This specific location’. Naturally, a cold event anywhere in north America is going to be more likely than a cold event in any one specific location but what about a cold event that simultaneously encompasses most of the contiguous US and a large part of Canada? Surely, that would be a lot less likely in a warming climate? I say this because WWA choose to define a somewhat limited geographical area which appears to be unjustified given the huge area affected by colder than average temperatures and even much colder than average temperatures.

But let’s assume that they were only interested in those areas which were much colder than average. Here is how WWA define their affected region. As you can see, it leaves out a lot of the areas also affected by really extreme cold and encompasses a lot which were not: 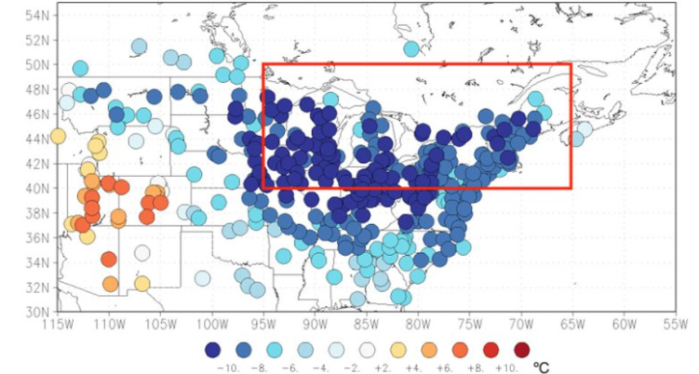 In reference to this graph, WWA say:

So you have to wonder why they left out such an obviously large area where anomalies were -10C or below? Seems to me they should have shifted their box south and west to really get the area affected by extreme cold. However, even with their odd choice of region, the recent cold snap in America looks cold indeed and really quite exceptional:

I’ll wager it would have looked even more exceptional had they moved their box to encompass the actual area affected by really extreme cold, but no matter, one can see the pattern. That pattern is:

So thank you World Weather Attribution, you have confirmed that the extreme cold in America this year was ‘just weather’, not “good old global warming”, that it was not caused by a warming Arctic and that, all things being equal, Americans and Canadians should prepare for a decade or two of colder than average winters very soon. Perhaps time to ditch unreliables and make sure fossil fuel and nuclear generation capacity is sufficient to keep people warm.

6 thoughts on “World Weather Attribution: Trump Was Right – America Could Have Done With Some Good Old Global Warming.”