So, after being banned from Twitter, I’m working up to a ban from Facebook. I’m getting there, slowly. Having comments wiped off is always a good start. Hayhoe posted this: 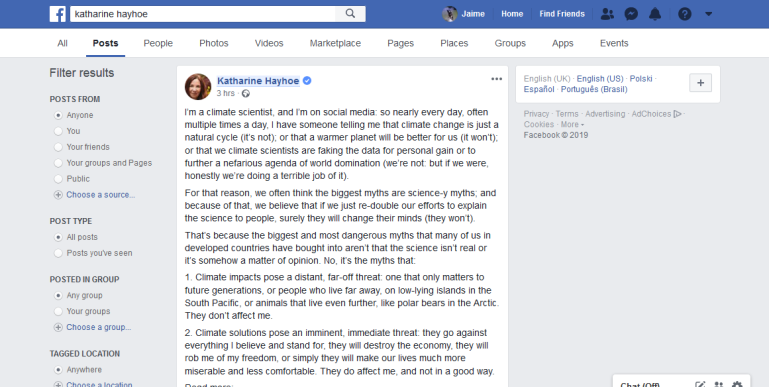 I replied and she responded:

The sheer arrogance and nauseating condescension of her statement, the assumption that because she is a scientist, anything posted by social media users which doesn’t conform to her opinion is therefore false and misleading! On top of that, the invitation to ‘re-educate’ myself (by watching stupid global weirding you tube videos and going to the SkS website) before being granted the privilege to post again on her scientists’ page! Nothing I said was false or misleading. She censored my comment of course, but not before I took a screenshot.

Hayhoe is selling snake oil on social media and will tolerate no members in the audience who are sceptical of her product. Yet she (and her adoring alarmist fan club) pretends that she is a top class climate science communicator.