In a comment to Tom Fuller’s excellent article Paul Matthews (14 Jan 19 at 9.47am) mentions an article in Psychology Today which, as Paul says, is full of falsehoods and inventions, illustrating Tom’s point about the denial of mainstream science by those who claim to defend “the science” against “the deniers.” Psychology Todayis a popular magazine, so not held to the same standards as a “proper” science journal, but the authors are serious people – a “public health specialist” and a psychiatrist. And they’ve even written a book called “Denying to the Grave” to illustrate their point that it’s a life or death issue.

[Has anyone ever pointed out that “life or death” is not a true antinomy? You can’t have one without the other. I googled to check, and among the “life or death issues” that came up first were sociology, bioethics, and insurance. Important, yes. But mankind survived for much of its history without them.]

What the climate scientists are telling us is that if we don’t stop burning fossil fuels the human race faces extinction. The fact is that many people born this year will not survive global warming if it continues at the current pace and exceeds 3.50°C by 2050.

This is false of course, but interestingly so. I’m no expert on Goebbels, but I suspect the authors (Sara and Jack Gorman) have beaten the Nazi propagandist by a mile in sheer lying power here. The most evil, the most lunatic theories ever devised have threatened the human race with all sorts of things, like degeneration, or civilisational collapse, and purveyors of these false and evil theories have been rewarded with Nobel prizes and membership of the Royal Society. But neither H.G. Wells nor Paul Ehrlich nor Joseph Goebbels have threatened us with extinction in pursuit of their various aims, as far as I know. At least not by 2050.

Leukemia and climate change have more in common than you might think.

(I’ll be coming back to Ms Spodek Keimotitz in another article, just as soon as I’ve resolved my problem with Wordpress’s eccentric ways with my text ) and our old friend Katherine Hayhoe. 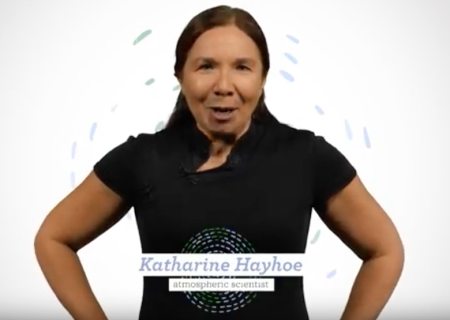 What should happen now is that Dr Hayhoe writes to Psychology Today to point out that she does not in any way wish to lend credence to the statements in the article which deny the science. But will she?

Dr Hayhoe is quoted, not for her expertise in climate science, but for her endorsement of the views of the authors that:

..denial is a response to something we fear, and we know from animal and human studies that fear induces freezing and passivity. But studies also demonstrate that giving a fearful animal or human a task that even symbolically addresses what is feared can minimize freezing and promote action. Thus, recommending tasks that we can perform in our daily lives may help us overcome our feeling that mitigating climate change is a hopeless enterprise and motivate us join the voices insisting on ending burning fossil fuels… Being part of a group with a common goal may help people overcome denial and have the courage to face the realities of climate change, however grim they may be.

The article links to an article of Katherine’s in Science entitled  “When facts are not enough” in which she tells us:

I am a climate scientist who has spent a lot of time trying to make climate science more accessible. I’ve authored National Climate Assessments and numerous outreach reports; I host a YouTube show called Global Weirding; I tweet; I’ve even promoted knitting patterns that display rising temperatures. Yet the most important step I’ve taken to make my science communication more effective has nothing to do with the science. As uncomfortable as this is for a scientist in today’s world, the most effective thing I’ve done is to let people know that I am a Christian. Why? Because it’s essential to connect the impacts of a changing climate directly to what’s already meaningful in one’s life, and for many people, faith is central to who they are.

Now knitting and religion are two activities in which I’ve never indulged but for which I have the utmost respect. But let’s skip one, purl one, and go straight to her YouTube videos.

Views of her fortnightly Global Weirding videos started of well with 23,390 views for the introductory one on Sep 28 2016.

The video for Sep 13 2017 is called “This is all just part of a natural cycle, right?” Well, perhaps. May the sinusoidal force be with you Kate, because, barring corrections to historical data, at current trends, your viewership will be in negative territory sometime round about March 2019. Meanwhile, readership of Cliscep is progressing nicely, than you. By leaps and bounds, even. Which means sometimes up, sometimes down, but mostly up, like global mean temperature anomalies.

[The quotation in the title is from the Lorenz Hart song, which continues:

(contrarian, or what?) and then:

(..and an empiricist to boot. Astrophysicists please note)

Lorenz Hart’s contributions to Climate Science, besides his acclaimed “Blue Moon” include “I Didn’t Know What Time It Was” and “Where or When.”]