Global warming works in mysterious ways apparently and it is a wonder to behold the triggered, hypocritical, general dumbness and crass stupidity which its workings have on this occasion provoked among the Warmist classes – with a little help from the tweet of a certain Donald T. I’ve seen dumber responses from the AGW crowd, but I really can’t remember when.

So yes, it’s cold – very cold, record-breakingly cold – in America and Canada right now and this is making the people who regularly feed us a diet of unrelenting global warming propaganda just a teensy bit uncomfortable, especially those who reside in Canada and the Eastern United States, who now know what a wind chill of -55C feels like, something which is unknowable to many of us here in Western Europe.

But not to be deterred from keeping the warmist flame burning, even in the midst of an historically cold winter, they have taken to Twitter and the MSM to explain, variously, why ‘it’s just weather innit’, to elucidate for the benefit of us climate-challenged ignoramuses the difference between weather and climate and finally, to explain how, yes, in certain circumstances, global warming doesn’t mean just extreme heat, but can mean extreme cold too. I have only skimmed the surface of this fount of Warmist wisdom regurgitated very recently onto social media post the appearance of the dreaded 2017 polar vortex, but I do have some nuggets to present to our bewildered and naive Cliscep readers. Hopefully thus, they – and maybe even Trump if he deigns to alight here at our humble domain – will finally come to understand the difference between extreme cold, which is weather (except sometimes when it’s not), climate (which is NCDC/GISS global mean surface temperature data usually, but can be literally anything) and extreme heat (which is almost always due to ‘climate change’, aka global warming).

Firstly however, I want to talk about Little Ice Ages – which residents in Eastern USA and Canada might reasonably be forgiven for thinking they’re in, right now. Specifically I want to talk briefly about THE Little Ice Age (a generally cold period extending from the 12th century to the 19th century) and the Maunder Minimum (1645-1715) and a ‘new Little Ice Age’ which apparently some scientists warn is nigh and will “freeze the Thames over”. Why? Because the MSM has been promoting it very recently, rehashing old research, in a manner not dissimilar to the way in which they promote global warming scares, i.e. misleading headlines and poorly presented half-information. The research in question is Valentina Zharkova’s 2015 paper on solar polar magnetic fields which, at the time, provoked ‘lively’ debate in climate circles. Discussion here at Tallbloke. I’m not sure why this story is doing the rounds again, but it’s topical, with the current extreme cold in Canada and the US. It would seem that Sky News decided to interview Zharkova and this is what they reported.

A model of the Sun’s magnetic activity suggests the River Thames may freeze over within two decades, experts say.

Which is basically a very stupid headline. First, it’s a lot warmer now than when the Maunder Minimum affected Britain, so any cooling effect arising from a new low in solar activity is probably not going to return winter temperatures to what they were in the late 1600s. Secondly, the Thames was a lot more sluggish and shallow in the days of the London Frost Fairs, so I don’t imagine it will freeze solid nowadays with the relative ease it did back then. The text is a little less alarmist and rather more informative and quotes Zharkova as saying that she hopes global warming from man-made ‘pollution’ will be temporarily halted so we have more time to save the planet. Obviously, she’s being a little more careful not to upset the Consensus enforcers who tried to censor her research the last time round.

Her actual research seems quite sound, based as it is on a mathematical model of how the two oscillatory principal components of the solar background magnetic field gradually shift in and out of phase throughout historical solar cycles, varying also in amplitude. When they are in phase and at or near maximum amplitude (eg. cycles 21-23), sunspot activity peaks, as does total solar irradiance, UV irradiance and solar activity. When they are anti-phase and particularly when their amplitude is at a minimum, solar activity dies off to near zero (no sunspots) and a Grand Solar Minimum occurs. This is what Zharkova’s mathematical model predicts for cycles 25 and 26 and she claims that, run backwards, it accurately hindcasts the Maunder Minimum of 1645-1715. So, more hard science, less wishy-washy climate modelling and you can see why the AGW crowd may be getting jittery about it. A ‘temporary’ 30 year global cooling will make it next to impossible to sell global warming to an already sceptical populace. Moreover, if any significant cooling in the northern hemisphere or across the globe occurs, it will almost certainly imply that sensitivity to GHGs is less than what scientists claim it is and solar activity has more of an effect on the climate than they care to admit. Disastrous.

What’s the relevance to the exceptionally cold weather in North America now and that which struck in winter 2014? Maybe none at all. Then again, such weather may be an early warning sign of the approaching decline in solar magnetic activity, due to start in earnest around 2030. But you won’t hear any climate scientist or AGW advocate ever say this. More than their job’s worth. Far easier to claim ‘it’s just weather’ or, alternatively, extreme cold weather due to global warming.

Ed Hawkins of the Met Office was quick to dismiss the impact of any ‘new Little Ice Age’, as he has been in the past.

Changes in solar activity have a small affect on our climate but nowhere near as much as this story makes out. Don’t expect to be ice skating on the Thames anytime soon: https://t.co/aIQErz7EuA https://t.co/gPV09LtHlr

On that same day, Dec 27th, the really cold weather started settling in:

RECORD BREAKING COLD: With a current temperature of -33, International Falls has broken the previous record low of -32 set in 1924! BRRRR!! #MNwx

The next day, a personal perspective:

With the cold came record breaking snowfall in the Great Lakes, particularly in Erie, Penn.

Then Donald Trump tweeted this:

Cue mass triggering of Warmists. Even the normally even-tempered Doug McNeall of the Met Office couldn’t resist having a go:

President Trump is at an advantage here – he’s using a direct,simple, single (and wrong) example of evidence against global warming that people can feel right now.

The Guardian, of course went into hysterics, screaming:

You have to read it to believe the hypocrisy which permeates every line of this article. The author writes:

The president was reheating two favourite tropes: the conflation of weather with climate to pour scepticism on global warming, and the supposed cost to the American taxpayer of the Paris climate accord, from which he has confirmed the US will withdraw.

Climate scientists, however, have long warned against using individual weather events to ponder the existence or otherwise of global warming. Weather, they point out, refers to atmospheric conditions during a short period; climate relates to longer-term weather patterns.

“There is a fundamental difference in scale between what weather is and what climate is,” he said. “What’s going on in one small corner of the world at a given moment does not reflect what’s going on with the planet.”

Say what? Run that by me again! Rewind to Harvey hysteria, California drought hysteria. Rewind to June 2017, when Europe and the UK had a few very hot days. This is what was reported by the BBC:

The June heat waves that impacted much of the UK and Western Europe were made more intense because of climate change say scientists.

That same day had seen the mercury hit 34.5 at Heathrow in what was the UK’s warmest June day for 40 years.

Got that? A hot summer month in France, Spain and Portugal and one ‘record’ hot June day on the tarmac at Heathrow constitutes a very clear signal of man-made climate change! If it’s hot, it’s not weather, it’s climate, man made climate to be precise and even just one hot day on the super-heated tarmac at Heathrow in an otherwise mediocre British summer is irrefutable evidence of climate change. You just could not make this stuff up! How breath-takingly idiotic, ignorant and downright hypocritical do you have to be to write this tripe? Beyond the grasp of my faltering senses, I have to admit.

The New York Times chipped in with its own familiar brand of stupidity too, with this ever so enlightening explanation of the difference between weather and climate:

Climate refers to how the atmosphere acts over a long period of time, while weather describes what’s happening on a much shorter time scale. The climate can be thought of, in a way, as the sum of long periods of weather.

Or, to use an analogy Mr. Trump might appreciate, weather is how much money you have in your pocket today, whereas climate is your net worth. A billionaire who has forgotten his wallet one day is not poor, anymore than a poor person who lands a windfall of several hundred dollars is suddenly rich. What matters is what happens over the long term.

Right, that’s clear as mud then and it explains why Trump is a dunce and NYT journalists are expert atmospheric/climate scientists.

By December 29th, the stupidity, like the freezing weather, had really set in, and was beginning to bite:

This statement shows we are idiocracy. "It's really cold outside today" is not about climate. And while people who laugh at science wont get it, yes, global warming can lead to mass freezing. Today, however, is just weather. But the least informed will keep laughing the loudest. https://t.co/KOlNUaNhU4

But this tweet wins hands down in the stupid stakes for me. Currently 7219 likes and still going strong.

For those Cliscep readers still confused about the difference between weather and climate, Steve Goddard has kindly provided this graphic. So now we all know and President Trump, if you’re reading this, you should be thoroughly ashamed of yourself. 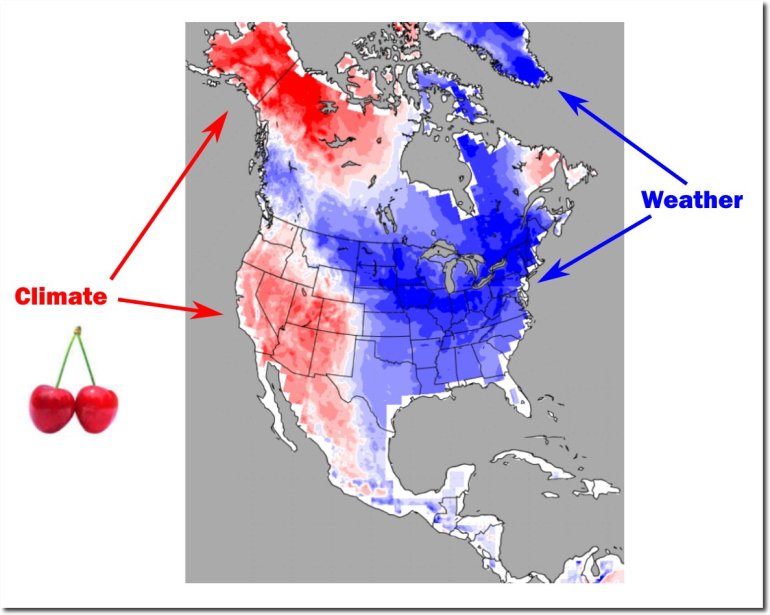