A journal called Scientific American (or ScAm for short) hosts the latest blog from Kate Marvel, claiming that the “Hot Planet” is “Creeping toward permanent drought.” The subtitle is “Both trees and climate models are telling us the same frightening story”.  Most of the text is her usual substance-free emotional wittering: “The smell—a peppery sweetness, pine without Christmas—is what I remember when I think of home”, so I won’t bother to quote much of it, but here is the final paragraph:

From my office in New York, I can look at these future projections and see California dancing from dry to wet and back again, until there is no again and it settles in to permanent drought. If the trees survive us, they may live to tell of a time where the grass turned brown, the map turned brown, and it was a long time before it was ever green again.

The “future projections” link here goes to a story from a few years ago when the “permanent drought” scare was at its peak, being promoted by the media and climate fraudster Peter Gleick.  Since then, California’s reservoirs have filled up and the “permanent drought” is now a subject for ridicule at sceptical blogs. So it is surprising that anyone would try to resurrect this fake news again.

Here’s a graph from a paper in Nature showing the fraction of the earth suffering from drought over the last 30 years. The different colours show different drought intensities on a 5-point scale from “abnormally dry” (D0, yellow) to “exceptional drought” (D4, dark red). It shows little change; if anything, a slight decrease in drought:

For the USA, there is a graph of the amount of drought on the EPA website, showing that there’s no trend and the worst period of drought was in the “dust bowl” era of the 1930s:

A recent post by Roger Pielke shows a graph of the area of the US suffering from drought since 2000, from the DroughtMonitor website: 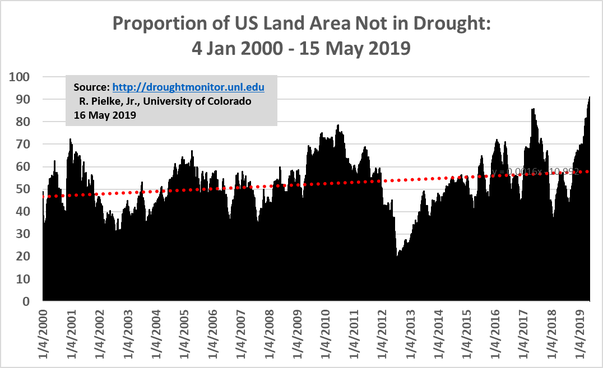 The trend line shows that drought appears to be decreasing, and the area not under drought seems to be at a record high.

Finally, there is the latest IPCC report, SR15, published last autumn, which has this to say:

Is it possible that Marvel is unaware of all this evidence, and has never thought to look for it? Or is she well aware of it, and simply lying to the public about the approaching “permanent drought”? Either way, it’s an astonishing illustration of the dishonesty of the climate movement and the media organisations such as ScAm that publish this drivel.

Other climate scientists, of course, are quite aware of the falsehood of Marvel’s claims. In any normal, honest field of science, this pseudoscience would be exposed by others in the field. But in the institutionally dishonest field of climate science, the opposite happens. Bogus claims are promoted and described as “wonderful”:

Check out this wonderful and evocative piece of writing by @DrKateMarvel on the impact of climate change on her home state. https://t.co/Py45ouoSwJ

The stream of falsehoods from a relatively small number of high-profile climate scientists, aided by explicit promotion or complicit silence by the rest of the field, and given publicity by the media, has several consequences.

Firstly, it creates and fuels climate scepticism. If you look at this blog or others, or the twitter accounts of prominent sceptics, you’ll see that the main focus is on exposing the false claims of climate scientists, activists and politicians. If they stopped doing this, we’d have nothing to write about and the CliScep blog would soon close down. A related consequence is that is that climate activists have failed (as illustrated by the victory of Donald Trump and the recent election result in Australia) to win public support for their preferred policies, as discussed in this recent blog post by Fabius Maximus.

Secondly, it creates polarisation, since while some scoff, other more gullible, less well-informed, and usually younger people believe these falsehoods and become terrified and depressed as a result.

Here is one of the victims of the propaganda, from a post at reddit the other day:

I’m too depressed to do anything but lie in my bed and cry.

I just realized I’ve planned out my entire life, what college I’m going to, what I’ll study, what state I’ll live in, what city I’ll live in, what apartment I’ll live in, when I want kids, everything, but now I realize I’m not even going to get to finish my whole collage before global warming kills us. And there’s nothing I can do.

How do climate scientists sleep at night?