Roger Pielke Jr has now moved on from the climate debate into sports policy, but he still issues occasional bulletins of climate stories that are well worth reading. The latest, Pielke on Climate #6, discusses emissions intensity, hurricanes, and ocean heat content, but starts off with a remarkable fact from a recent public opinion survey. The  survey begins by asking people how important certain issues are to them. Out of six issues, climate ranks lowest (with 48% saying it is very or extremely important) after immigration, energy policy, terrorism, the economy and health care (84%).  Nevertheless 48% is fairly high, and this goes up to 74% if you include “moderately important”.

Now here’s the interesting bit. People were then asked:

Only 51% said they would be prepared to pay this dollar a month. That figure drops to 27% when the sum is $20 per month. Here’s Roger’s graphic: 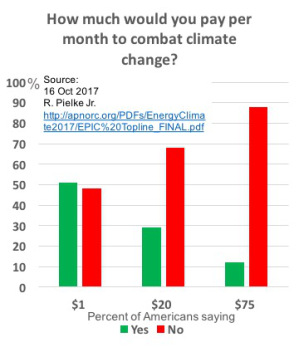 Pielke calls this the “iron law”. Here’s my way of putting it: If you ask people if they care about climate change, most people will say yes. But when it comes to how much they are prepared to pay, the answer is remarkable little.