It appears that the IPCC may not be the only large organisation with a four-letter acronym starting with I and ending with C that produces reports that distort science to make it conform to an agenda.

A group called IARC (International Agency for Research on Cancer), which is attached to the WHO, produced a report in 2015 on glyphosate, the chemical used in the weedkiller Roundup.

A reporter for Reuters, Kate Kelland, wrote an article a few days ago saying that the IARC had introduced changes between the draft and the final version of the report, deleting various sentences that had said that glyphosate did not cause cancer. Worse still, some past studies that had concluded that there was no significant effect on animals were reported as showing significant effects.

As a sceptical chappie who likes to check things for himself rather than accept what people say, I looked into one of Kelland’s claims. The part about changes in the drafts can’t be checked unless you have the drafts, but the misreporting of previous studies is easy to check, and she’s right. The IARC report says that a study (JMPR 2006), found that haemangiosarcoma increased significantly in male mice:

In the second feeding study, there was a significant positive trend in the incidence of haemangiosarcoma in male CD-1 mice.

But if you look at the original study, it says

There were no statistically significant increases in the incidence of any tumours, either benign and malignant, in either sex when compared with the control groups.

Check it out for yourself by searching both documents for that big word.

In response to Kelland’s Reuters article, IARC issued a remarkably feeble response yesterday. The issue above, of rewriting the conclusions of previous studies, is not mentioned at all.

The analogy with climate change is clear, with evil American glyphosate manufacturer Monsanto playing the role of Exxon.

It’s a hot topic right now because the EU is currently deciding whether to continue licensing glyphosate or ban it. 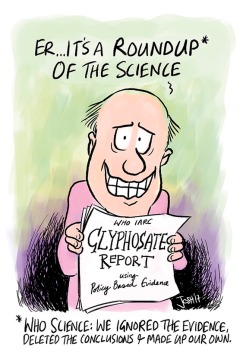 Matt Ridley, The Glyphosate Scandal. Ridley says that the IARC finding is contradicted by other studies, and mentions some dubious financial dealings of one of the IARC scientific advisers, Christopher Portier.

Geoffrey Kabat, a cancer epidemiologist, writes in Forbes magazine that “Converging evidence points to the agency’s skewing its glyphosate report to reach a desired conclusion.”

BBC: Nothing yet on this specific issue, though Farming Today is talking about glyphosate in view of the imminent EU decision. The latest news today is that the EU decision has been delayed.

New Scientist: Ban on weedkiller won’t save anyone from cancer. There’s also a video.