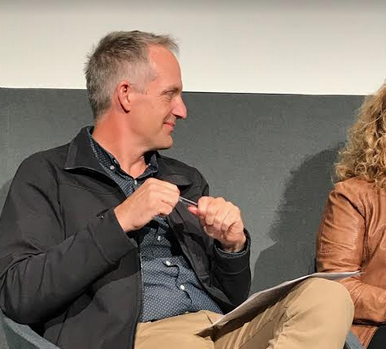 Melbourne University’s famously loopy Sustainable Society Institute (MSSI) was hung out to dry the other day by one of its lunchtime panellists, Professor Jon Barnett,  at the uni’s Elisabeth Murdoch building. MSSI’s audience of climate zealots couldn’t believe their ears. (listen to the audio here). A political geographer, Barnett (pictured above) agrees with the human-caused CO2 global warming hypothesis, although he’s a bit lukewarm on the ‘catastrophic’ angle.[1] He must have seemed a safe choice to endorse MSSI’s “climate emergency” narrative.[2] But instead he told the audience – many visibly annoyed – that he’s fed up with zealots demoralising Pacific atoll people with forecasts of their climate-borne doom by drowning. 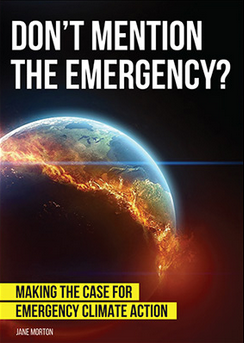 Several attendees crowded around as he was leaving, urging him to reconsider his heresies. Chief among them was Jane Morton, clinical psychologist and convenor of Darebin Climate Action Now, who presented him with her booklet Making the Case for Emergency Climate Action. This is a hellfire tract, as the cover shows North, Central and South America ablaze all the way from Alaska to Tierra del Fuego, demonstrating CO2’s astounding powers. In the melee I myself wheedled a copy off her, but then she successfully hit me for a $5 donation for her compadres’ work in Darebin, which rivals Brunswick and Northcote as Melbourne’s most crazed green municipality.[3] (I also came home with a recruitment flyer: “Extinction Rebellion welcomes you. We are the people we have been waiting for. And we have arrived just in time”).

The inside cover of Ms Morton’s tract shows the Potsdam Climate Institute’s founder, Hans Schellnhuber, glooming, “Climate change is now reaching the end-game”. Professor Barnett, not easily intimidated, told Morton that Schellnhuber’s forecasts of a billion (or is it many billions?) dying from 4degC warming were “ridiculous”. Schellnhuber has been chief climate alarmist to Pope Francis, notwithstanding that he’s an atheist and population-control advocate.

Schellnhuber’s Potsdam people have populated Melbourne University since 2015 via the Australian-German College of Climate & Energy Transitions. Barnett and I agreed that Schellnhuber was not altogether rational, although I’d used a more colloquial term.

I liked Barnett’s comment to his post-speech interrogators that he didn’t think sea levels would rise by a metre this century. I also gave Barnett a friendly reminder that his colleague at Auckland University, Professor Paul Kench, has demonstrated via aerial photographs and satellite imagery that three-quarters of Tuvalu’s atolls are growing, with the atoll’s net land area is up by three per cent over the past 40 years. I hope Barnett can work that news into his next speech about the atolls the ABC and other alarmists are always claiming to be on the verge of drowning, even after Russell Skelton’s ABC/RMIT Fact Check affirmed their growth in area.

I also hope his Melbourne University career will thrive, unlike that of Peter Ridd, late of James Cook University, who denied the Barrier Reef’s doom. Or Susan Crockford, late of Canada’s Victoria University, who has paid the price for denying the polar bears’ doom (bear numbers have  quadrupled, to about 40,000, since 2011). I hope Jon will remain the odd man out among Melbourne Monoversity’s 9,000 academics.

MSSI introduced the panel by claiming the planet’s life foundation systems “are being stretched to breaking point”, i.e. we may soon join Uranus as a dead planet, which wouldn’t be good at all! The session took place under the aegis of MSSI icon Greta Thunberg, the unstable 16-year-old Swedish high- school dropout and pawn of adult activists, whom MSSI quotes: “This is above all an emergency, and not just any emergency. This is the biggest crisis humanity has ever faced. This is not something you can just like on Facebook.”

By now I’m sure you want to know what Barnett said to upset the MSSI fans. Here goes, thanks to my iphone and rusty shorthand.

Barnett: People have told me, ‘You are a sceptic’. I am by no means a sceptic. We need to reduce GHG emissions. It is real and urgent problem. (But) we need to get past this kind of singular politics that if you believe in climate change you must believe the world is coming to an end. If you don’t say that [the world is ending] and say maybe there is a way that [island] people can have a decent future through climate change, then you are not with us and you are sceptic.

He said people carry on about “drowning atolls” to encourage the West to cut emissions, saying “It’s an emergency, we should be afraid, it’s in everyone’s interest to cut emissions”. But they ought to consider how their claims about the atolls are interpreted by atoll residents.

Barnett: They hear that they have no power and no future, and they all will be forcibly displaced and may have only 10 years left on their island. It’s as if I walked into your life and didn’t know you and hadn’t seen you before nor seen your medical records, and said, ‘We have a problem of cancer in society and you will be dead in ten years, I don’t want to hear what you have to say, and don’t care what your options are, I’m just telling you, ‘Dead in ten years! See you later.’

That is how the [climate message] is heard in those places. It’s as if they have no future living on their drowning islands, and they are all to become environmental refugees and so on.

They [climate alarmists] make huge assumptions about people and the state of the science. No doubt rising emissions are going to cause warming and rising seas, but now drill down to the Pacific islands and how climate change will manifest there. What will the corals do, the beach sediment, freshwater lenses, the vegetation?

Scientists are still very uncertain. Believe it or not, the islands are not all the same, they show different histories of response, and more important, we don’t know when [impacts] will happen. Will they run out of freshwater or fish or lose their beaches in 10 years, 40 or 60 years? We don’t know. We don’t know how people there will respond, or what capabilities they possess to deal with environmental changes. Look at Singapore and Hong Kong, how those island [states] have responded and the amount of technology [available] in say, one nuclear aircraft carrier. Think about what scope those atoll islands have to adapt. People say with absolute certainty that [residents] can’t live there in ten or 20 years time, well that is a bit problematic.

If people told you that you are powerless and doomed, and they weren’t interested in your reaction, how would you respond? Would you think that was fair, or get angry about the legitimacy and authority of those outsiders? Would you become depressed, believe them and think about leaving your island?

If the worst thing was to force people off their islands, it would be ironic if the message about climate forced them off in anticipation. It would be even more ironic if people who ran around saying, ‘I have a solution to move the people now’ brought into the present the [dire] impact onto people worried about their future. People not only hear [these alarming forecasts] but react to them.

The ill-effects of alarmism extended even further, Barnett said, to the international aid and development community. If those islands had no future beyond ten years, what would be the point of putting in desal 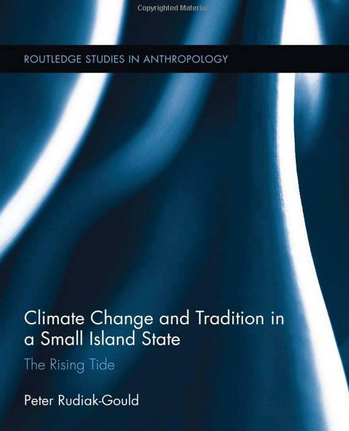 plants? “Island failure” became a self-fulfilling prophecy as investors withdraw. More than that, the locals could over-exploit their resources for quick cash in the belief there would be no future generations to look after.[4]

He quoted anthropologist Peter Rudiak-Gould’s research on Marshall Islands people, some of whom blamed their own failings for global climate change. Some refused to believe the scare, and others saw it as yet another scam being imposed by colonialists. Some dissociated from the message, some turned to prayer, and some felt so anxious their mental health suffered.

Barnett said islands like the Marshalls had already suffered colonial changes to land tenures and their economies, even enduring nuclear tests. There was the further colonialism of imposing the results of the West’s emissions on them to threaten their future. And the third wave of colonialism was how we talk about them, refusing to give them a voice and hope. [Case in point: at December’s UN COP25 gabfest in Madrid, 21-year-old Tabita Kaitamakin Awira Awerika, from Kiribati, reportedly shed angry tears and told delegates about her “anguish” about the future.] Barnett also quoted psychologist Dr Kari Gibson, who did her PhD on Tuvalu citizens’ reactions. She found they showed distress at clinically significant levels because of what they were hearing.

Despite all these Western narratives and ignorance about the islands, the people are doing a lot to adapt to climate, he says.

Barnett: There isn’t an atoll country in the world not planning massively to secure and fortify their capital and key parts. Look at the Maldives planning for dramatic and bold changes.[5] Atolls are absolutely facing up to the challenges, making hard and politically brave decisions about how to live through a changed climate. At local level they’re using social networks, health care, education, diets, sustainable planting and fishing, to show their agency to adapt. These belie our assumption that there is nothing they can do and they have no future. What atoll people are doing is absolutely inspiring. They don’t want to leave and they’re exercising everything available to continue living there.

Our narratives about future climate change impacts in these places need a re-set. We need to respect their right to live there. It’s lazy for us to say they have no future and just stop being concerned about them. We must reduce CO2 emissions [I assume his “we” includes those naughty nations China and India] and support the islands in adapting. We need to talk about them differently in terms of rights, agency, respect and assistance, rather than ‘See you later!’

Well said, Professor Barnett, although it’s high time you checked on the validity of IPCC forecasting models. Maybe you could also persuade anthropologist Peter Rudiak-Gould to study MSSI staff and audiences as his next project.

[1] Barnett is an Australian Research Council Laureate Fellow and a Lead Author of the chapter on Human Security in the IPCC Fifth Report. He co-edits the journal Global Environmental Change.

[4] He omitted a further point he had made in a Conversation article, that locals could also blame “climate change” for their own conservation malpractices, and continue doing this bad stuff. He concluded in that piece, “It seems all we can do is talk about loss, migration, and waves of climate refugees. Having let them down twice, this defeatist thinking risks denying them an independent future for a third time. This is environmental neo-colonialism … We should all stop talking down the future of low-lying small islands, because all this does is hasten their demise.”

[5] The Maldives in fact are only drowning under their own sea of chicanery, farce and corruption, abetted by Australian taxpayers.