About 250 shock troops for Extinction Rebellion (XR) gathered in the basement of Melbourne University’s Glyn Davis Building the other day for a tactical briefing . They were mobilised by the poo-soapers of the Melbourne Sustainable Society Institute, helped by fanatics from the Potsdam Climate Institute.[1] 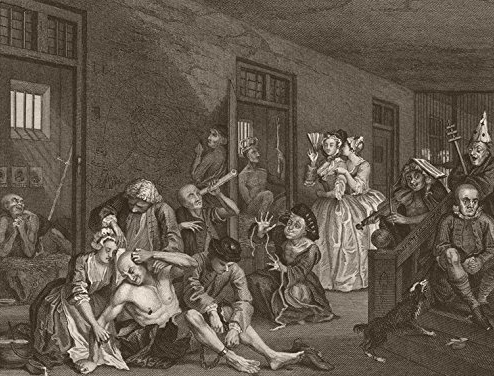 The instructor was Professor Neil Gunningham from Australian National University. The ANU is even more woke than UMelb, if that’s possible. Its Institute with four administrators has 200 academics who don’t come cheap at up to $190,000 and 17 per cent super, along with their 100 post-grad students.[2] Pining for prompt global decarbonising, Gunningham introduced XR as a “good thing”, saying, “I have been persuaded of the value of much of what they do.” His audience consisted of starry-eyed post-grad students, doctors’ wives, otherwise-unemployable academics and bearded retirees of both sexes. Working folk seem to lack the leisure for lunchtime Leninist lectures.

To give my hard-pressed editor a break, click to see the original here

His research includes “the roles of climate activism in averting a climate catastrophe.” As a rain-maker, he’s hoovered up $428,000 ARC grants (2014-16) for “Energy governance and climate change: towards a low carbon economy”, and well over a million for non-climate research about regulatory issues.

By coincidence, my email this weekend included an invitation from XR and Rebels Beyond Borders to join the demonstrators at Madrid’s COP25 gabfest next week: “Expect a series of beautiful creative actions, including ‘The Dead Sea March’and some lively ‘Civil Disco-bedience’. XR will also take part in the ‘Social Summit for Climate‘, where 150 grassroots organisations will join together to prove that the people have the power!”

Gunningham warmed up his audience for such affirmations but fell into the trap of not being extreme enough. One of the doctors’ wives (I think) named Jane, an XR member, in question-time challenged him for saying “climate change” rather than “climate emergency” and “existential threat to existence”. Use of those powerful terms, she reckoned, would unite 99 per cent of people under XR’s banner. “I was just wondering if you have some concern or caution about that [language]?” she asked, her intonation reminding me of an ex-girlfriend.

Gunningham (abashed): “No, I…I…don’t have concerns. It is not an aspect I have researched deeply. I actually do use that language, and I would also talk about putting climate change on a ‘war footing’. That narrative is also helpful because it’s alerting people ‘you can’t mess with this thing’ … I’ve used terms today ‘urgent and rapid action’, I could have used ‘climate emergency’, ah – I have no objection to that terminology.”

‘War footing‘ or not, the professor did seem too wishy-washy for the occasion. I could imagine the XR ladies fuming, ‘Gunningham, you’re either with us or against us on the overthrow of capitalism.’

Actually, the talk title was dramatic enough to draw me to the basement in the first place: “Averting Climate Catastrophe: Extinction Rebellion, Business and People Power.”

Perhaps, as groups like Extinction Rebellion gain momentum, and join with others, a tipping point will be reached, generating rapid and far reaching changes across the economic and social system. If so, then bottom up action driven by civil society, in tandem with its allies and as part of a broader web of influence, may yet be the catalyst for rapid, radical and constructive action by nation states.

Another middle-aged lady piped up, casting herself as a climateer Che-Guevara, “I’m also XR, like most of the audience. With the rise of the state against us, does that suggest we are winning?”

Gunningham: “It’s a lot better than apathy. When my ANU divested from fossil fuel companies, it produced a torrent of vicious attacks. The AFR had it on the front pages for three weeks.” But he thought that the divestment campaign may well have peaked: “You can only flog one tactic so long, the media stop paying attention and it loses impact.”[3]

Next question: “Most people in the audience are already converts to climate change but to get a mass response will require enrolling people who are not middle class and not confronting the end of the world but [their bills at] the end of the month. How do we balance their concerns about paying the mortgage with helping them understand the serious emergency about climate change?”

One person gave two light claps. But the question was too close to the bone, and everyone else kept hands on laps.

Gunningham replied that XR was “not the best vehicle for communicating with these people. As with Lock the Gate [a successful campaign against fracking], you need people connecting with the community, with effective messaging about how to pay the mortgage: local people, perhaps a religious response, the Country Women’s Association, the Knitting Nannas —  XR can be part of that.”

By “Knitting Nannas”, Gunningham was referring to XR’s media props, compliant elderly ladies who knit during demos and wave their teapots and shawls to distract gullible reporters from the demos’ Antifa thugs and XR idiots attaching themselves to roadways and door knobs.

Further question: “When people achieve material security, they lose interest in causes, and go from left to right. In Australia we’re mostly middle class, it’s rare to see [working stiffs interested]. How do we reach more people as the world becomes more middle class and less invested in problems that they think don’t affect them?”

The professor’s ready response: rely on schools to inculcate youngsters with “much more awareness” of climate perils. Speaking  “as someone who did his share of door knocking in Warringah” to get the denier Tony Abbott kicked out, he found the electors were both affluent and climate conscious.

The ANU scholar began his talk describing XR’s strategy of “non-violent, disruptive civil disobedience – a rebellion”. XR demands that government “create and be led by the decisions of a Citizens’ Assembly on climate and ecological justice” – sounds like a Robespierre scenario, trundling objectors to an XR biodegradable scaffold.

Gunningham, who I’ve already said was a bit washy-washy, had an XR slide saying “Governments must act now to halt biodiversity and reduce greenhouse emissions to net zero by 2025.” I’m not sure why biodiversity should be halted, but in any case Gunningham explained heretically (but accurately) that zero-carbon by 2025 was “impossible according to science”. If you were polite you would call it a stretch goal, he explained. I could add that achieving zero-CO2 2025 would require Australia alone to build 33 nuclear power stations a year for six years. That would, politely, be a stretch.

He put up a naughty slide of “Criticisms of XR”

2/ No role for minorities or rurals

3/ Does it ignore the fundamental causes of the climate crisis?

On Point 3, he said: “Are they [XR] trying work within parliamentary democracy to shift voters in rural seats, or talking about some revolutionary change? It’s a rather big question to be left hanging … It’s argued by some that if you assume capitalism is the fundamental cause of the crisis, you must change the entire economic system.” But it may be that “radically transforming to a zero carbon society and transforming the economic system and mode of production is beyond our capacity”. (Sympathetic nods by the audience).

Gunningham conceded the whole climate-change fantasy has been a failure: “Thirty years’ activism has achieved little,” he said, not demos, lobbying, petitions, shareholder activism. That’s why XR plumps foe civil disobedience over a long period in full public view. His model is the US civil rights movement, where police violence was caught by cameras and evoked popular support. I’d add Sergei Eisenstein‘s Battleship Potempkin vision of St Petersburg in 1905, with that baby-bearing pram clattering down the Odessa Steps.

He also felt working people should suck up the inconvenience of XR’s disruptions for their own good. “Is disruption counter-productive?” he wondered. “People are turned off by being inconvenienced on the way to work, or being late for work from being stuck in their car for 45 minutes. It produced mixed reactions. But when they got over that irritation they still want governments to take action. XR says that being disrupted for 45 minutes is nothing to the disruption if civilisation starts to collapse around you.” 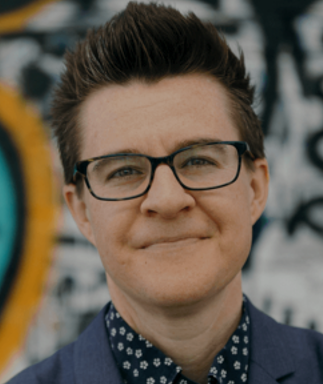 He’s also a fan of some Harvard academic called Dr Erica Chenoweth (right)  who has calculated that non-violent resistance movements mobilising as little as 3.5 per cent of their countries’ populations have overthrown brutal dictatorships such as those of Pinochet in Chile and Milosevic in Serbia.

He quoted her: “A few million Americans could prevent their elected government from adopting inhumane, unfair destructive or oppressive policies — should such drastic measures ever be needed.” Ms Chenoweth is a specialist on “political violence and its alternatives” and a beacon for “women- identified activists”. She’s won a prize for her “outstanding proposals for creating a more just and peaceful world order”. She won’t coach overseas civilian insurgents but did write an open letter to MSSI “in my personal capacity as a citizen of the world who is committed to peace, justice, and dignity for all people.”[4]

Gunningham continued that the XR “persuasions” were best based on people identifying with XR message-bearers, rather than winning factual points (which I’d agree are in short supply). XR people need to get beyond “progressive inner-city voters” and their own tribes in order to engage with the non-woke. Cunningly, XR zealots would mute their calls for “ecological justice” when dealing with country folk, and talk instead about “saving our national heritage”.

“These are dark times for climate activists,” Gunningham finished, repeating it twice. “It’s just possible there’s sufficient momentum building to achieve transformative change, with XR as a possible vehicle that will take the movement to the next level, precipitating rapid and radical change.”

I was in the front row and waved energetically to ask a question. But the moderator, Anna, who doubles as an erratic and over-enthusiastic dancer at XR rallies, wouldn’t give me the nod. I think she smelt a rat.

[1] Potsdam’s director Ottman Edenhofer has won undying fame for his quote that climate policy “has almost nothing to do any more with environmental protection” and “we redistribute de facto the world’s wealth by climate policy.”

[3] Another practitioner of stupid divestment policies is the Australian Academy of Science.

[4] I also liked Chenoweth’s blog-piece manifesto headlined, “Now is not the time to despair”. It started, “It would be easy to become skeptical about the viability and efficacy of nonviolent resistance in the age of Trump. But this would be to ignore a number of incredibly hopeful trends … We are witness to ongoing people-power movements in Hungary, Turkey, Ecuador, Zimbabwe, Venezuela, and the United States… It is no accident that the United States is experiencing an explosion in community groups and coalitions, who are coming together in an unprecedented level of civic engagement to resist abusive, indiscriminate, and hateful policies… Now is not the time to despair. It is the time to organize and prepare.”