Climate models were supposedly the future of climate change research. Their use heralded a new golden age of scientific understanding according to former Met Office chief scientist Dame Julia Slingo:

I think today the incredible complexity and power and skill of these models that we use . . . . they are one of the great achievements of modern science and you realise that we are entering I think a Golden Age for climate science. And it’s good that we are because we have some really really big questions to answer for the world.

Contrary to that, what appears to be actually happening is that ‘soft’ socio-economic models are gradually stealing the thunder of complex global circulation climate models based on hard physics.

Socio-economic projections have formed the backbone of IPCC GHG emissions since the early days of IS92 scenarios in AR2. They progressed through to the SRES scenarios, thence to the RCP scenarios in AR5, which were developed using complex IAMs (Integrated Assessment Models) in conjunction with a simple energy balance climate model called MAGICC ( Model for the Assessment of Greenhouse Gas Induced Climate Change). Now we have the most complex incarnations of socio-economically projected emissions scenarios which include mitigation and adaptation as well as ‘baseline’ GHG concentrations generated in the absence of any carbon reduction measures.

The so called Shared Socio-Economic Pathways will be show-cased later this year in a Special Report by the IPCC on the impacts of a 1.5C warming above pre-industrial levels. The CMIP6 ensemble of up to the minute high resolution complex coupled AOGCMs presumably will not take centre stage until April 2021 when WG1 The Physical Science Basis reports. By then, I imagine we will all have been told ad nauseum how runaway catastrophic warming of up to 5.1C by 2100 is a real possibility if we do not urgently reduce fossil fuel use. So I wonder, what additional catastrophic climate change projections will the CMIP6 climate model ensemble have to tell us that we’re not going to hear about between now and 2021, courtesy of the all-new SSPs? Not a lot I suspect.

The IPCC appears to be rapidly switching emphasis from the science (which, it is implicitly claimed, is now largely settled, barring a few minor tweaks here and there, and improvements to models) to socio-economic projections and associated mitigation/adaptation strategies. Literally, they are telling us our future survival depends upon how we choose to live in the next 80 years, because the science of AGW is basically done and dusted and we know enough about how the climate changes naturally to be able to now project reliable estimates of future warming based mainly upon anthropogenic GHG concentrations (derived via emissions scenarios). Nothing could be further from the truth.

Zeke Haufather has written a very readable summary of the main aspects of the new SSPs, of which there are 5, labeled, unsurprisingly, SSP1-SSP5.

These SSPs are now being used as important inputs for the latest climate models, feeding into the Intergovernmental Panel on Climate Change (IPCC) sixth assessment report due to be published in 2020-21. They are also being used to explore how societal choices will affect greenhouse gas emissions and, therefore, how the climate goals of the Paris Agreement could be met.

The new SSPs offer five pathways that the world could take. Compared to previous scenarios, these offer a broader view of a “business as usual” world without future climate policy, with global warming in 2100 ranging from a low of 3.1C to a high of 5.1C above pre-industrial levels.

The point to note here is that, yes, the SSPs do feed into the CMIP6 ensemble of climate models to generate a whole range of different climate projections. But, the range of 3.1C to 5.1C warming which Zeke mentions here is generated by just one climate model (MAGICC) having a sensitivity of 3C, with the differing amounts of warming dependent only on the particular emissions scenarios and the consequent GHG atmospheric concentrations plus the climate feedbacks associated with that one model. The reason that MAGICC is used in this way is not specifically to project a climate response; it is because an estimate of the climate response is needed because the carbon cycle – and hence the GHG concentrations – are affected by the amount of warming. Arguing this on Twitter in the case of RCPs resulted in Steven Mosher calling me a moron and shit for brains because he disagreed. Charming. If you’re reading Steven, your pal Zeke confirms that you were wrong:

The RCPs set pathways for greenhouse gas concentrations and, effectively, the amount of warming that could occur by the end of the century . . . . .

The simple climate model MAGICC was used to convert greenhouse gas emissions from the IAMs into atmospheric concentrations and future warming.

The plain truth is, because MAGICC emulates closely the CMIP3 model ensemble and is used with a sensitivity close to the multi-model mean of that ensemble, the climate responses it generates are useful pointers as regards what one might expect when the projected GHG concentrations generated from the emissions scenarios are plugged back into more sophisticated climate models. So although scientists are at pains to point out that the RCPs (and now the SSPs) are not actual climate projections, that is effectively what they are, albeit less sophisticated ones.

After the passage quoted above, Zeke goes on to say:

They show that it would be much easier to mitigate and adapt to climate change in some versions of the future than in others. They suggest, for example, that a future with “resurgent nationalism” and a fragmentation of the international order could make the “well below 2C” Paris target impossible.

If this doesn’t ring alarm bells about what is motivating the UN IPCC and its development of the new SSPs, I don’t know what will. The UN are clearly envisaging in the not too distant future the development of a globalist political infrastructure which will override nationalist concerns.

The impetus for the development of the broader, more complex socio-economic ‘narratives’ of the SSPs (in contrast to the narrower focus ’emissions pathways’ of the RCPs) appears to be to demonstrate how mitigation combined with adaptation can work to avoid the nightmare futures which climate models predict on the basis of no mitigation whatsoever and the unrestrained use of fossil fuel reserves (the baseline scenarios). They tell us how it could all be reasonably OK if we mend our wicked ways and start seriously mitigating. In that respect the contrast between SSP1 and SSP5 is telling:

SSP1 and SSP5 envision relatively optimistic trends for human development, with “substantial investments in education and health, rapid economic growth, and well-functioning institutions”. They differ in that SSP5 assumes this will be driven by an energy-intensive, fossil fuel-based economy, while in SSP1 there is an increasing shift toward sustainable practices.

SSP1
Sustainability – Taking the Green Road (Low challenges to mitigation and adaptation)
The world shifts gradually, but pervasively, toward a more sustainable path, emphasizing more inclusive development that respects perceived environmental boundaries. Management of the global commons slowly improves, educational and health investments accelerate the demographic transition, and the emphasis on economic growth shifts toward a broader emphasis on human well-being. Driven by an increasing commitment to achieving development goals, inequality is reduced both across and within countries. Consumption is oriented toward low material growth and lower resource and energy intensity.

SSP5
Fossil-fueled Development – Taking the Highway (High challenges to mitigation, low challenges to adaptation)
This world places increasing faith in competitive markets, innovation and participatory societies to produce rapid technological progress and development of human capital as the path to sustainable development. Global markets are increasingly integrated. There are also strong investments in health, education, and institutions to enhance human and social capital. At the same time, the push for economic and social development is coupled with the exploitation of abundant fossil fuel resources and the adoption of resource and energy intensive lifestyles around the world. All these factors lead to rapid growth of the global economy, while global population peaks and declines in the 21st century. Local environmental problems like air pollution are successfully managed. There is faith in the ability to effectively manage social and ecological systems, including by geo-engineering if necessary.

Both worlds are socially and economically attractive. The one involves being more ‘responsible’ and thus involves the least challenges presented by adaptation to and mitigation of climate change. The other involves massive global economic development reliant upon fossil fuel reserves resulting in global warming of up to 5.1C (above pre-industrial) by 2100. This means that this ‘plausible’ socio-economic scenario will result in global warming of 4.1C over the next 82 years! Readers can decide for themselves whether that sounds plausible or not. The projected fossil fuel use in SSP5 is actually greater than that in the RCP8.5 ‘worst case scenario’, which was itself scarcely believable and which was, according to Doug McNeall of the Met Office, in answer to Matt Ridley, mainly of use to tease out a signal:

What about the other ways in which RCP8.5 is unrealistic, and its over-use, as @RogerPielkeJr points out? Does anybody really think we will be burning 10x as much coal in 2100?

So, people do climate model runs for lots of reasons, and running a high forcing scenario is often done because you see signals better. It’s about learning about your models response.

I can almost guarantee that SSP5 will be similarly misused and its integral (and technically necessary) climate responses to varying emissions scenarios used as projections of future nightmarish climate scenarios, long before SSP5 is plugged back into the CMIP6 ensemble to generate a much wider range of possible climate futures. This graph proves it’s already happening: 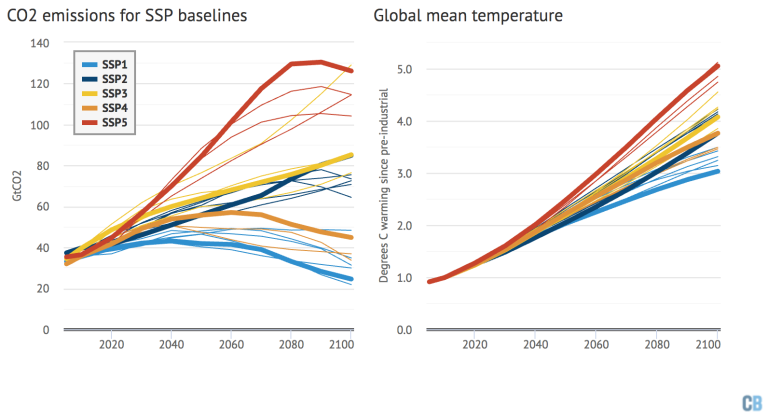