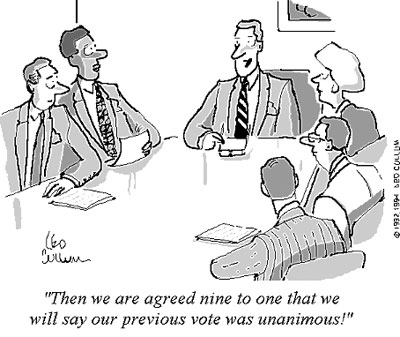 I hear that it is the height of arrogance for CAGW sceptics to criticise the climate scientists without themselves having any experience or expertise in the subject. Apparently, if they are not able or prepared to offer an alternative thesis resulting from the fruits of their own scientific studies, then they should just shut up, listen and learn. The problem with this viewpoint, however, is that it presupposes that the credibility of the CAGW consensus lies entirely within the bowels of a particular climate model ensemble, or within the teleconnective prowess of strip-bark bristlecones flourishing somewhere on a North American mountainside. These and other equally fascinating technicalities are assuredly destined to remain esoteric to those of us who are strangers to the mysterious artistry of hindcasting, or fail to appreciate the logic and power of an imaginatively centred principal component analysis. But that isn’t all there is to the debate.

As important as it is to understand the science, it is equally important to understand how the scientific community works. Ideally, of course, such an insight should stem from working within the community. But let us not oversell that advantage. After all, is there really that much that sets scientists apart from the rest of the attention-seeking, grudge-bearing, power-hungry conclave of simian skulduggery we lovingly refer to as the human race?

Being a fully paid-up member of the aforementioned club, I feel more than qualified to comment upon one particular foible of the human condition as it appertains to the climate science debate. And to do so, I would like to share with you the following story, plucked kicking and screaming from my illustrious past. All the CAGW advocates have to do is just shut up, listen and learn:

My taste in sandwiches has varied over the years and, therefore, serves as a good proxy for determining the timeline for the causal network that has led to my present system state. So when I say that I had just finished a cheese and pickle sandwich you should understand that I was, at that time, still within my Office Health & Safety Management period of aspirational decline. To be precise, it was 10:30am and time to present the site manager with my latest office safety report (which, incidentally, I called a HAZOP to make sure everyone understood I was an expert).

Normally, these reports were largely comprised of tedious objections railed against the noodle-fest that the IT department euphemistically referred to as their computer cable-management. But, on this occasion, I had more serious matters to address. Someone, in a magnificent triumph of expedience over reason, had chosen to store twenty boxes of archived paperwork under the stairwell of the main emergency fire exit route. Now, who can tell me what is wrong with this picture?

Armed with such an explosive revelation, I was confident that I would soon gain the attention of my normally apathetic superior. My expectations were indeed quickly realised, but not with the desired effect.

“Well, thank you very much, John,” he opened sarcastically. “Because now that you have put this down in writing, I’m bloody-well going to have to do something about it!”

Having blithely cursed the report, my boss let it fall gently upon his desk before fixing me with an excogitative expression. I remained unimpressed, since I was convinced he’d just looked the expression up in a dictionary. Besides which, it was going to take more than just fancy adjectives to put me off the scent. Nevertheless, the veins in his forehead, by now alpine in their grandeur, were throbbing with the menace of a managerial decision.

It was shortly after that point that I was to learn that it is, in fact, easier to remove a health and safety manager than to remove twenty boxes of archived paperwork.

There are a number of morals that one can take away from this story, but the one that I want to focus upon is this. Before the encounter, the consensus between myself and my manager, regarding the acceptability of using a fire exit route to store an obstructive stock of flammable material, had been fifty-fifty. To put it in climatological terms, the consensus was a mere 50%. However, following my dismissal from the debate, the consensus had risen to a somewhat more impressive 100%. So much had been achieved with the minimum of deliberation. All that I had offered my superior was doubt, uncertainty and inconvenience. All he needed to settle the issue was his authority. Such is the nature of risk-based decision-making.

Later in my career (within the corned beef and tomato period, as I recall) I was to come across the same dynamic in various guises; but the underlying process was always the same. When making a safety-engineering decision, consensus would often emerge, not from a reduction of epistemic uncertainty following investigation and reasoned debate, but from a narrowing of focus, marshalled by the ‘guiding hand’ of authority. Those who did not play the game had a habit of losing their vote.

I am reminded of the fate of the space shuttle Challenger. Certainly, NASA applied a lot of the pressure for launch, but I believe it fell to Thiokol’s own general manager to offer his engineering colleagues the now infamous advice:

“Gentlemen, it’s about time you took off your engineering hat and put on your management hat.”

Under such pressure, the engineers were forced to reverse their advice regarding the next morning’s launch. That night, one of the engineers went home and was asked by his wife, “Did you have a good day at the office today darling?”

The message that climatologists wish to impress upon the public is that they find the scientific evidence for the CAGW hypothesis compelling, and it is for that reason alone that they speak with unanimity. I can readily accept that this is the personal experience of the vast majority of those working within the field. However, one cannot ignore the fact that most of those colleagues who did not share similar levels of conviction are no longer players, and in many instances they did not leave the game willingly. It would be nice to believe that this is simply because they lost the scientific debate, but from the outside looking in, it looks more as if they were offering an unappreciated level of doubt, uncertainty and inconvenience.

When forming a herd, there are two important criteria that have to be met. Firstly, the individual has to want to be part of the herd. But secondly, the herd has to want the individual as a grazing partner. You don’t need to be a climatologist to understand this; you don’t even need to be a scientist. All you need is the experience of working in a discipline where risk-based decisions are routinely supported by incomplete evidence. This is a field in which I have plenty of experience and expertise, so please do not dismiss my CAGW scepticism as weaponised ignorance.