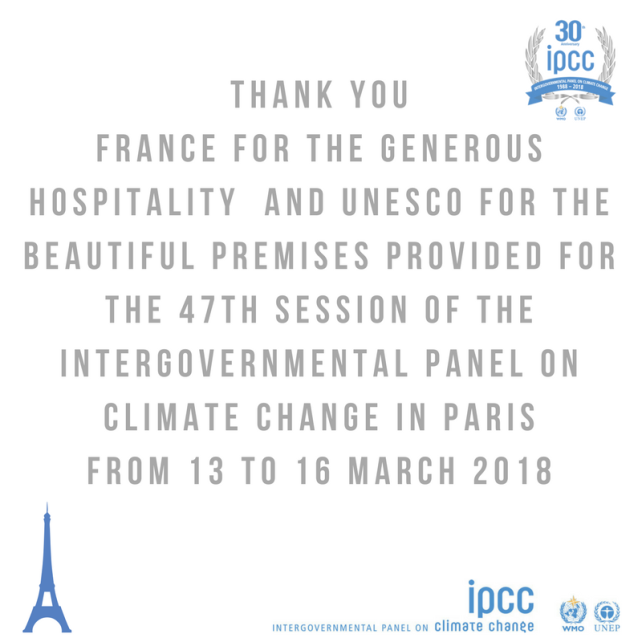 For four days this week, March 13 – 16, the IPCC has been congratulating itself on its 30th birthday, in a lavish celebration in Paris. Apparently the premises were beautiful and the hospitality generous.

A number of deep scientific insights were provided at the meeting, such as “We must put climate solutions in the context of sustainable development” from the IPCC Chair Hoesung Lee. You can read his speech here if you really want to. Quite how they managed to make the birthday party last four days isn’t clear.

But this isn’t the only recent IPCC meeting. Just the week before, March 5 – 7, the jamboree jetset met in Edmonton in Canada.  An article at the Conversation tells us there were 600 delegates.  Chairman Lee was there again, dispensing his words of wisdom:

What happens in cities may be decisive in whether the global community succeeds in hitting the 1.5°C warming goal – #IPCC Chair Hoesung Lee @Cities_IPCC #CitiesIPCC #SR15 #IPCC30 pic.twitter.com/q8mwCqc4pX

And just a week before that, here he is again, this time in Bologna (why are IPCC meetings never held in Birmingham?) at a meeting called “All4theGreen”.

The slogan for this one was “mobilizing climate science”.

I can’t help wondering how much all this costs, who is paying for it, and what its carbon footprint is.

“We can achieve the goals of the Paris Agreement” – Myles Allen (speaking personally) at #All4TheGreen Bologna event #IPCC30 pic.twitter.com/vJ7u5GfGfe

Too slow? Try the Reader View