This phrase refers to the idea that “your opponent is considered to be malign and willfully ignorant, whereas your own side is noble and uniquely enlightened”, which Pielke says is one thing that unites the two sides of the climate debate.

He has tweeted the slides of his talk, and they are linked, so you can see all 62 slides by clicking on the first one:

Here’s my brief summary of some of his slides: Pielke cites Inhofe, Mann and Trump as good examples of Manichean paranoia. He says this sort of paranoia was described by Richard Hofstadter back in the 1960s, and that one of its aims is to eliminate opposition, something that he has experienced himself.  Paranoia has not been very successful, in the sense that public opinion hasn’t changed much in many years. For democracy to work properly, you need to talk to people you disagree with –  that’s the first of his 5 recommendations. The second is maintaining the integrity of science assessments, by including minority views and avoiding stealth advocacy. And there’s much more, about his “iron law” (people are only prepared to pay a relatively small amount), the Paris agreement, climate policy, decarbonization…

Josh was there and has produced one of his amazing cartoon summaries (click and click again to get bigger versions): 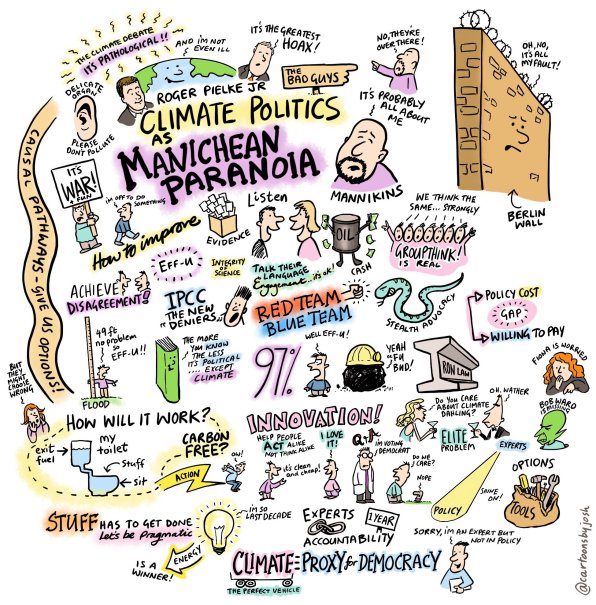 A video of the talk should be available soon.

The video of the talk is now available:

Do watch it – he’s a very good speaker and there’s a lot more that he says that’s not in the slides. There are a few little jokes as well. (“My Ferrari says Koch Bros on the license plate”).  There’s also a long and interesting Q&A session at the end. Questions were asked about other problematic areas in science, why he is so optimistic, how do we make politicians pay attention, the 97% consensus issue, the balance between expertise and democracy, how to bridge polarised political divides, whether there’s any will to resolve the polarisation problem, the role of the IPCC, and more. A point he made repeatedly is that experts should act as “honest brokers” by offering politicians a range of options rather than promoting only their own preferred option.