A new survey is out today, European Perceptions of Climate Change (EPCC), on public opinion in the UK, France, Germany and Norway. It’s being talked about at an echo chamber conference, see the twitter tag #EPCC17.  It’s also discussed in the Guardian. The authors include some of the ‘usual suspects’, Nick Pidgeon and Adam Corner. The polling was done by Mori, using mostly face-to-face interviews, in June 2016.

From the sceptical perspective, there were two particularly interesting points. Firstly, the survey showed, as many previous ones have found, that climate isn’t a top concern for most people, especially in the UK. When asked, unprompted, what the most important issue was over the next 20 years, climate change ranked 13th on the list, though it did rather better in the other countries polled: 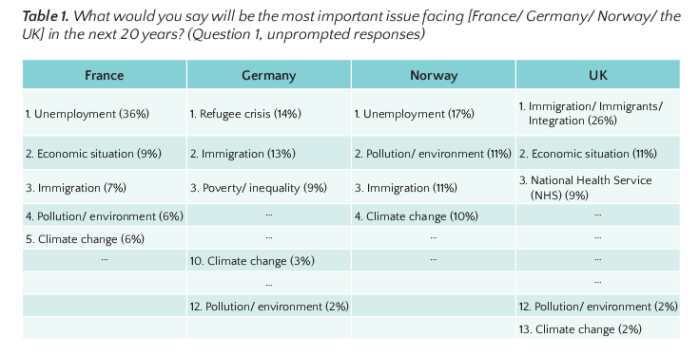 The consensus story also took a hammering in this poll. Only 30% of people in the UK think that at least 80% of scientists agreed that climate change is happening and largely caused by humans:

According to Carbon Brief, Prof Pidgeon is “quite surprised” by this.

Among the other findings, most people are at least fairly worried about climate change, though in the UK we are not so concerned as people in the other countries. On causes, more people went for partly natural and partly human than chose mainly caused by humans. The survey also covered policy issues such as energy sources, subsidies and rising energy costs, and support for the Paris agreement (high in Norway, more lukewarm in the UK).

19 thoughts on “Climate not a priority for public”