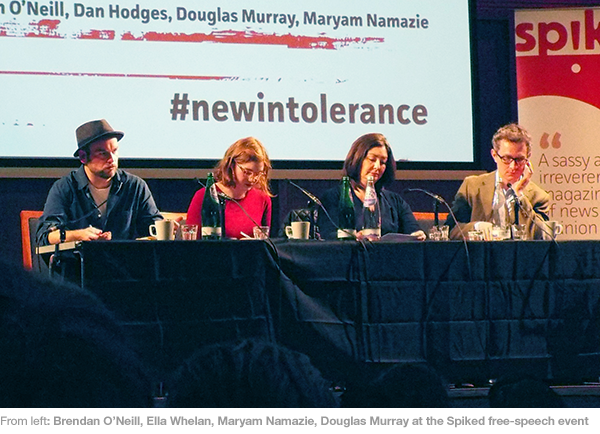 The Party told you to reject the evidence of your eyes and ears. It was their final, most essential command. His heart sank as he thought of the enormous power arrayed against him, the ease with which any Party intellectual would overthrow him in debate, the subtle arguments which he would not be able to understand, much less answer. And yet he was in the right! They were wrong and he was right. …With the feeling that he was speaking to O’Brien, and also that he was setting forth an important axiom, he wrote:

So went George Orwell’s original manuscript for 1984, before he decided that the world he was portraying of very subtle, softly-censoring marginalisation (where the proles could say what they liked so long as it was through a weird form of messaging, but only to each other, while global platforms of goodthink blithely continued to arrange the world to their own ends) was too sophisticatedly totalitarian to be believable.

Not really, of course. But if Orwell’s masterwork had taken this line it’s arguable that many more of us would now be yelling a lot louder about what things have come to. On Twitter and Facebook, for example, saying ‘you suck’ or similar will get you suspended for ‘harrassment’; criticising the religion of Islam, or questioning immigration policy will also see your social media use curtailed; and dipping a sceptical toe into ‘intersectional’ feminism, which seeks to acknowledge a hierarchy of grievance – so a black, transgender lesbian is more oppressed than a white, middle-class feminist, for example – will see even feminists and gay rights activists given the cold shoulder and ‘no-platformed’.

As climate sceptics you’ll be no strangers to the idea of institutional authority clamping its hand over unwelcome mouths. The softly-sabotaging tactics now applied to Peter Tatchell and Germaine Greer are what critics of climate change alarmism have faced over many years. Fancy debating all this? Forget it: I won’t dignify your argument by even sharing a stage with you.

It was no surprise, then, to see Dr Benny Peiser at a recent debate on the growth of these speech-muffling tendencies. The debate was organised by online magazine Spiked and focussed on the growing popularity of ‘safe spaces’ on university campuses – that is, spaces where students can gather safe in the knowledge that their views won’t be challenged. As Dr Peiser points out, building a safe space is nothing new: academics and scientists, especially climate scientists, have been into the idea much longer than the current student body.

IW: So we’re here at the Spiked conference on free speech and safe spaces – what relevance does this have to climate, the climate debate, do you think?

BP: Well, climate issues obviously are part of the taboo issues that can’t be discussed freely on campus, the problem not just limited to students and their activists trying to prevent a debate, but the scientific community itself creating a space where the debate cannot occur. So we are concerned, not just what’s happening among the student body but also among academics themselves, and you could argue that the students are essentially copying the tactics of some of the scientists who have prevented critical speakers and sceptical speakers from voicing their opinion or asking questions. So it goes much deeper than just the student body.

IW: So the kind of – the whole thing is a lot older than – it goes back generations, this encroachment on… free speech.

BP: Yes, of course it goes back much longer, but it has been very successful. And that was one of the things I wasn’t too happy with speakers here saying if – you know, even if you prevent speakers from speaking, they will then make their views noticeable on the web, or so.

BP: I think this is a very successful strategy in shutting down views you don’t like. The climate debate shows how you can intimidate all society in not speaking freely. It works, unfortunately, and unless we learn the lessons of how the stifling and the intimidation and the demonisation of certain topics actually not only stifles debate but intimidates a whole group of people, this will be used by activists as a very strong tool to force down their views. It’s not about preventing debate, it’s about really enforcing what is acceptable and what isn’t.

IW: Yeah. Yeah, um, so the pursuit of knowledge becomes secondary to um, sort of, policing an industry, a career, a whole…

IW: We’d better get back in. Thank you, thanks very much.

The Victoria Derbyshire Show (BBC1) were also at the conference – see their report here.