We are, according to Stephan Lewandowsky, dealing with a problem bigger than anything humanity has ever seen. That’s how he describes climate change in the latest issue of Nonesuch, the magazine for Bristol University alumni. Whether he means ‘…will ever see – when it arrives’ it’s difficult to say. However, if we are to take him at his word – that we are dealing with a problem now – I’m afraid I can think of worse things that have happened. 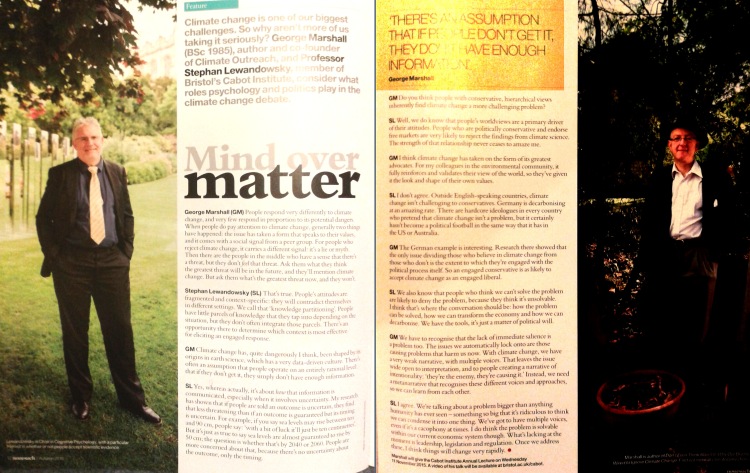 ‘THERE’S AN ASSUMPTION THAT IF PEOPLE DON’T GET IT, THEY DON’T HAVE ENOUGH INFORMATION’.

Climate change is one of our biggest challenges. So why aren’t more of us taking it seriously? George Marshall (BSc 1985), author and co-founder of Climate Outreach, and Professor Stephan Lewandowsky, member of Bristol’s Cabot Institute, consider what roles psychology and politics play in the climate change debate.

George Marshall (GM): People respond very differently to climate change, and very few respond in proportion to its potential dangers. When people do pay attention to climate change, generally two things have happened: the issue has taken a form that speaks to their values, and it comes with a social signal from a peer group. For people who reject climate change, it carries a different signal: it’s a lie or a myth. Then there are the people in the middle who have a sense that there’s a threat, but they don’t feel that threat. Ask them what they think the greatest threat will be in the future, and they’ll mention climate change. But ask them what’s the greatest threat now, and they won’t.

Stephan Lewandowsky (SL): That’s true. People’s attitudes are fragmented and context-specific: they will contradict themselves in different settings. We call that ‘knowledge partitioning’. People have little parcels of knowledge that they tap into depending on the situation, but they don’t often integrate those parcels. There’s an opportunity there to determine which context is most effective for eliciting an engaged response.

GM: Climate change has, quite dangerously I think, been shaped by its origins in earth science, which has a very data-driven culture. There’s often an assumption that people operate on an entirely rational level: that if they don’t get it, they simply don’t have enough information.

SL: Yes, whereas actually, it’s about how that information is communicated, especially when it involves uncertainty. My research has shown that if people are told an outcome is uncertain, they find that less threatening than if an outcome is guaranteed but its timing is uncertain. For example, if you say sea levels may rise between ten and 90 cm, people say: ‘with a bit of luck it’ll just be ten centimetres’. But it’s just as true to say sea levels are almost guaranteed to rise by 50cm, the question is whether that’s by 2040 or 2060. People are more concerned about that, because there’s no uncertainty about the outcome, only the timing.

SL: Well, we do know that people’s world views are a prime driver of their attitudes. People who are politically conservative and endorse free markets are very likely to reject the findings from climate science. The strength of that relationship never ceases to amaze me.

GM: I think climate change has taken on the form of its greatest advocates. For my colleagues in the environmental community, it fully reinforces and validates their view of the world, so they’ve given it the look and shape of their own values.

SL: I don’t agree. Outside English-speaking countries, climate change isn’t challenging to conservatives. Germany is decarbonising at an amazing rate. There are hardcore ideologues in every country who pretend that climate change isn’t a problem, but it certainly hasn’t become a political football in the same way as it has in the US or Australia.

GM: The German example is interesting. Research there showed that the only issue dividing those that believe in climate change from those who don’t is the extent to which they’re engaged with the political process itself. So an engaged conservative is as likely to accept climate change as an engaged liberal.

SL: We also know that people who think we can’t solve the problem are likely to deny the problem, because they think its’s unsolvable. I think that’s where the conversation should be: how the problem can be solved, how we can transform the economy and how we can decarbonise. We have the tools, it’s just a matter of political will.

GM: We have to recognise that the lack of immediate salience is a problem too. The issues we immediately lock onto are those causing problems that harm us now. With climate change, we have a very weak narrative, with multiple voices. That leaves the issue wide open to interpretation, and to people creating a narrative of intentionality: ‘they’re the enemy, they’re causing it.’ Instead, we need a metanarrative that recognises these different voices and approaches, so we can learn from each other.

SL: I agree. We’re talking about a problem bigger than anything humanity has ever seen – something so big that it’s ridiculous to think we can condense it into one thing. We’ve got to have multiple voices, even if it’s a cacophony at times. I do think the problem is solvable within our current economic system though. What’s lacking at the moment is leadership, legislation and regulation. Once we address these, I think things will change very rapidly.

Marshall will give the Cabot Institute Annual Lecture on Wednesday 11 November 2012. A video of his talk will be available at bristol.ac.uk/cabot