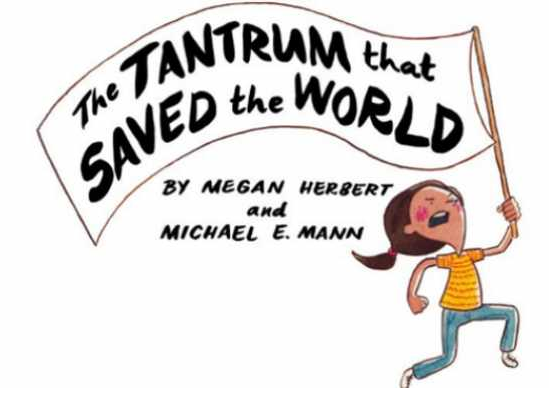 The year 2020 has hardly started and already Michael “HockeyStick” Mann has won an award.[i] It’s from the 13,000-member American Meteorological Society (AMS), headed by president Dr Jenni Evans of Penn State University. Mann has accreted more medals than a North Korean general, so he may be a bit blasé about this latest honor. The token award hardly compares with the $US100,000 he got with his Tyler Prize for Environmental Achievement last year.

About 55 other parties also won AMS awards for 2020. For example, one award was for research into aircraft turbulence and another for “development of meteorological standards for the nuclear industry”.

Mann, who works at Penn State University, was honored in the category of story books for school kids.  He co-authored “The TANTRUM that SAVED the WORLD”,  with Australian-born illustrator Megan Herbert, who once helped TV scripting of Neighbours. Their target market starts with four-year-olds and goes all the way up to eight-year-olds. The AMS claims the book “engages readers with empathy and compassion and empowers them to help save animals and people from the threat of climate change.” In other words,  by dimming lights and riding bikes, local kids can cancel out China’s planned addition of one coal-fired power plant per fortnight during the next decade.

Mann has expertise on tantrums. In 2012 he accused his climate foes of defaming a Nobel Laureate (himself), overlooking that he wasn’t a Nobel Peace Prize winner, let alone a Nobel Laureate.[ii]

The Tantrum book, published in late 2017, pre-dates little Greta Thunberg’s rise to guru-hood among climate alarmists. Yet its narrative arc is just like Greta’s. It features a young “Sophia”, whose home is besieged by animal and human climate refugees, led by a polar bear (you guessed it) who has run out of ice floes, a Kiribati family whose house has wound up underwater (as if), and a Syrian farmer who is an alleged victim not of ISIS head-loppers and girl-slavers but of  global warming. Sophia is drawn several times with a scowl only Greta Thunberg can match. And she has Greta’s ability to be venerated by adults for no discernible reason.

The clever animals paint posters in her house amid climate refugees, one wearing a hijab. The refugees wave slogans: “There is no Planet B” and  “Protect What You Love”. For some reason a climate-fleeing Bengal tiger is treated as dangerous but the polar bear isn’t.  Sophia’s revelation, in dismal doggerel, runs:

How would she feel if her land were depleted?
Her food disappeared? Her home overheated?
And what was to say that she wouldn’t be next?
She’d already noticed weird weather effects

HEY FOLKS! TO HELP MY HARD-PRESSED EDITOR KEEP HIS JOB, PLEASE CLICK HERE TO VIEW THE ORIGINAL THANKS TONY

So she leads a convoy to protest at City Hall about CO2 emissions. City bigwigs ignore her until she “kicks off a tantrum to save the whole world”, wielding her banner “Action Now!” Millions take up her message worldwide:

And there was Sophia, a MINIATURE furore,
Telling the multitudes how they could do more.
Cooperative action could turn this high tide.
They had strength in numbers and right on their side.

Co-author Megan Herbert mentions turning her research “into sparkling prose” but the above quatrains have the sparkle of a dead warthog.

The book’s last panel shows Sophia being put through on the phone to a US President (not, I assume, President Trump), much like Greta browbeats UN and EC leaders. The end-notes (described as “meticulously researched and peer-reviewed”) are a litany of porkies, ranging from the grand dying-polar-bear fiction to a claim that the Syrian civil war, allegedly caused by global warming, has led to “millions of climate refugees seeking safety elsewhere.” [iii]

The Tantrum book’s morass of pap and crap has hauled in further prizes and citations. The book’s blurb boasts that last year it won a  Moonbeam Award for “exemplary children’s books”. I checked this with some difficulty. It turns out that the Moonbeam mob crowned no fewer than 159 kids’ books and e-books with prizes. Mann’s  effort featured 116th on the list. It came in third with a Bronze Medal in the Environmental Issues category,  behind a book about a jaguar (Gold) and a seal (Silver). Other winning Moonbeam books included “F is for Feminist” which won gold in the category Mind-Body-Spirit/Self Esteem. Written “for feminists of all ages” , the cover depicts a feminist who is aged about four.

Mann has lately been on sabbatical in Australia, of all places. A fortnight ago Reuters quoted him thus:

“It is conceivable that much of Australia simply becomes too hot and dry for human habitation,” said Mann.

“In that case, yes, unfortunately we could well see Australians join the ranks of the world’s climate refugees.”

Climate refugees, or environmental migrants, are people forced to abandon their homes due to change in climate patterns or extreme weather events.

“It’s possible to grow the economy, create jobs, and preserve the environment at the same time. These are things that all Australians could embrace,” Mann said.

“They just need a government that’s willing to act on their behalf rather than on behalf of a handful of coal barons.“

As blogger Eric Worrall points out, Australia’s climate refugees have actually been southerners fleeing to sunny Queensland to escape their grey skies and obscene power bills.

Mann’s further absurdities include the assertion that beyond a mere 0.5degC more warming

things start to look quite bad on planet Earth. We bid goodbye to the world’s coral reefs, see massive inundation of many of our most populated coastal cities displacing millions, and must withstand ever more extreme and damaging superstorms, floods, droughts, heat waves and wildfires.

To avert this Brueghel-like hell-scene nothing less than a “world-war type mobilization” will suffice to combat fossil fuels, he opined last July. Two months later he was challenged (with five other colleagues) to a New York debate with three sceptic scientists David Legates, Willie Soon and Patrick Michaels. His response:

All of the noise right now from the climate change denial machine, the bots & trolls, the calls for fake “debates,” etc. Ignore it all. Deniers are desperate for oxygen in a mainstream media environment that is thankfully is no longer giving it to them. Report. block. Don’t engage.[iv]

Mann makes about 500 media appearances a year, spouting guff like that. (His opposite numbers on the sceptic side would be lucky to get ten chances a year to inject some sanity). Mann’s media fame then translates into prizes, medals and awards for climate communication.[v] In 2018, Mann won  the Climate Communication Prize from the American Geophysical Union (a token $US1000), which mentioned his Tantrum book among the accolades. The prize started in 2011 to promote “the importance of promoting scientific literacy, clarity of message, and efforts to foster respect and understanding of science-based values as they relate to the implications of climate change.”

Earlier in 2018, he won the $US5000 Public Engagement with Science Award from the American Association for the Advancement of Sciences, and in 2017 he collected the $US15,000 Stephen H. Schneider Award for Outstanding Climate Science Communication. And there was another award from the Geoscience Teachers’ Association.

Mann likes to be portrayed as a plucky underdog battling detractors financed by “coal barons” and suchlike. He has bravely testified to Congress, “knowing that such appearances will bring him under withering, partisan-fuelled attacks.” (Sceptic scientists like Judith Curry and Roy Spencer give testimony there without preening as martyrs). Mann’s AGU citation called him

an unflinching and courageous defender of the principles of free and open scientific investigation and the urgency of combating misinformation with the scientific facts of climate change. He has done so at great personal cost, persevering through terrifying death threats, organized smear campaigns, and protracted lawsuits.

Wait! Stop it there! The reality is that the well-funded Mann himself launched the “protracted lawsuits” against critics Dr Tim Ball and Mark Steyn and National Review nine years ago. Mann ever since has bounced the cases around the North American legal system at million-dollar legal costs and untold stress to Ball and Steyn. Ball last year finally won in court when Mann missed deadlines for promised production of his climate data. The case against Steyn (who is counter-suing) lingers unresolved.  It’s all looking similar to the Jarndyce & Jarndyce lawsuit in Dickens’ Bleak House.

Mann likes to claim his critics are paid liars or worse. When he tried this on conservative columnist Andrew Bolt in 2014, Bolt threatened to sue and Mann made a grudging backdown. Undeterred, Mann last October tweeted that another of his critics, statistician Steve McIntyre, was “a professional liar/denier-for-hire” and Mann again had to immediately tone down  the libellous imputations through another tweet.

Whatever other praise Mann might merit,  if any, it’s not for defending “free and open” scientific debate on climate. In advocacy against fossil fuel emissions, Mann stands at the pinnacle, worldwide. Warmists should remember, you are judged by the company you keep.

[i] Mann’s now-disparaged “Hockey Stick” reconstruction of 1000-year past temperatures gave the warming scare a kick-along in the IPCC 2001 report. Mann’s graph also managed to erase the Medieval Warming and the recent Little Ice Age. Steyn published a  book, “A Disgrace to the Profession” , comprising nothing but rejections of Mann’s research and methods by Mann’s own warmist colleagues.

[ii] Mann in 2012 filed suit against conservative columnist Mark Steyn and others. “It is one thing to engage in discussion about debatable topics,” Mann’s attorneys wrote in his complaint. “It is quite another to attempt to discredit consistently validated scientific research through the professional and personal defamation of a Nobel prize recipient.”

[iii] “With the polar bear’s survival at risk as a result of climate change, it was declared a threatened species by the US  in 2008…We can still save the polar bear  if we reduce our use of fossil fuels sufficiently.” The reality is that polar bear populations have quadrupled since 2011 notwithstanding rising emissions.

[iv] Mann did take part in a climate debate a year earlier, at the University of Charleston.