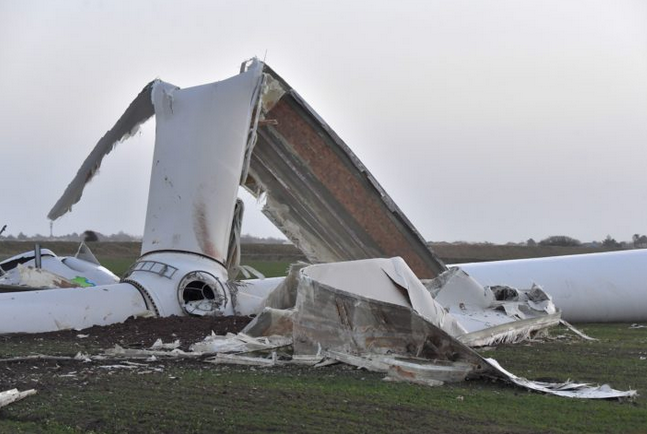 It’s good to know that wind turbine blades are a bird’s best friend, or something like that. I’m citing “fun facts” on the website of Synergy, Western Australia’s state-owned electricity generator. Synergy operations include half a dozen WA wind farms, mostly coastal. Synergy claims, correctly, that its fun facts “may blow your mind.” Fun Fact No. 9 is illustrated with a pic of Sesame Street’s Big Bird, pop-eyed with delight about wind turbines’ blades-and-splatter prospects. The caption reads (author’s emphasis)

Wind technology is now much more bird-friendly. Earlier versions of wind farms, such as the ones first launched in the US, had thousands of small fast-spinning turbines. Not so good for birds. Now, wind farms have taller and slower-moving blades which are much nicer for our feathered friends.

I don’t know about those “slower moving blades”. Tip speed of a 75m blade for a giant 6MW turbine can be 290km per hour. Despite my blown mind, I also managed to look up Greens Tasmanian stalwart Bob Brown and his objection last July to a company’s plan to put 120 wind towers, each 270m at tip height, on Robbins Island. He doesn’t agree with Synergy that turbines are “nice for our feathered friends”. He wrote instead, “For which of these species will the wind farm be the thousandth cut?”[1]

This is by-the-way, just stuff I came across while looking into what happens to wind farms when they get to their use-by date. National Wind Farm Commissioner Andrew Dyer tells Quadrant Online, “Some farmers have not got the best legal advice before entering agreements. The industry is new and the decommissioning clauses will be tested in the coming years as older wind farms reach the end of their economic life. These clauses are incredibly important if you are a landowner.” [2]

Germany now has 29,000 wind towers. The nightmare of scrappage and decontamination has already started, with 250MW decommissioned last year. Close to 10,000 towers must be decommissioned by 2023. One tactic has been to ship the toxic parts and rubble to corrupt African states to deal with. As for the US, it will have more than 720,000 tons of blade material alone to dispose of by 2040, blades being a particularly enduring space-age construct.

Overall, the wind industry is blowing cold. Australian wind operators’ so-called Clean Energy Council bemoaned last September a “collapse” in renewables investment in the first half of 2019. Late last year investors had signed on for 4500MW of new renewables, but this surge “has since collapsed to less than 800MW in each of the first two quarters of 2019”. The Council blamed “lack of federal energy policy certainty” (translated: ‘We want more subsidies!’), saying that “regulatory challenges” made investor confidence fragile. The Council made the useful point that if the states keep shutting down coal power while renewables stop growing, Australia is heading for insecurity and higher power prices. Conversely, one could add, more coal power and less “unreliables” would raise security and lower the bills to households. As federal resources minister Matt Canavan says, the country urgently needs an upgrade to Vales Point, NSW’s coal-powered generator, and a new one at Collinsville, Qld. Thousands of manufacturing jobs are at stake.

To set the scene on decommissioning, Australia has about 95 wind farms, most with turbines of 1.5-3MW. They account for 7 per cent of electricity demand. Only one Australian wind farm has been decommissioned – Salmon Beach Wind Farm, near Esperance. Started in 1987 and scrapped in 2002, it was owned by bird-friendly Synergy. Its six turbines rated at 60KW each were toys by modern standards, where a single turbine generates 4-5MW (when the wind blows at optimum speed, which isn’t often). That’s the output of a dozen entire Salmon Beach wind farms. Dismantling the small Esperance towers was straightforward, and one nacelle and blades was even left in a park as a souvenir.

The table below lists the oldest winds farms (of more than 1 megawatt) that are accredited under the Australian Government’s Renewable Energy Target scheme. Clearly, their useful life is limited, but none of the decommissioning plans are public. Mining projects have to provide for site restoration down to the last dandelion. 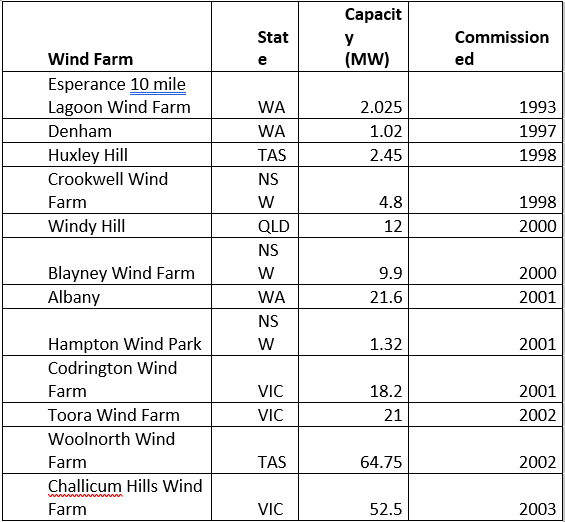 There’s some public-record material about decommissioning US wind farms, and it’s not re-assuring. In Minnesota, the 10-year-old Nobles Wind farm has 134 turbines of about 1.5MW and is operated by Xcel Energy. Xcel estimates a cost for scrapping each turbine at up to $US530,000 ($A770,000) or $US71 million total ($A103m). Each turbine has a tip height of 120 metres. Just to scrap one 40m blade involves crunching  composite material weighing more than 6 tonnes. The turbines themselves contain a smorgasbord of toxic plastics, oils, lubricants, metals and fibreglass.

As American Experiment points out, even $US71 million doesn’t finance a thorough clean-up. The contracts oblige Xcel to restore the land to a depth of only 4 feet, i.e. about one metre, whereas the foundations go down 5 metres. Moreover, underneath the 56 square miles (14,500ha) of this Minnesota wind farm is 140km of cabling and pipes. The documents don’t say if the cables would stay or go. But Palmer’s Creek, another wind farm in Minnesota with 18 turbines, will be allowed to leave cables in situ below four feet.

As to local terms, the Australian Clean Energy Council says,

Decommissioning means that the wind turbines, site office and any other ancillary infrastructure is removed from the site, and roads and foundation pads are covered and revegetated, allowing land to be returned to its former use.” Elsewhere the council says, “Typical landowner contracts require that the turbine is removed from its concrete foundation, and that the turbine site is covered in topsoil so that farming activities can continue.(My emphases. Would government greenies allow a decommissioned mine a similar latitude?).

The Council also suggests that a lease include a simple decommissioning plan at start-up, to be reviewed in final years in order to flesh out the details and updates. I’d read that as “Trust us, we’re wind power providers”. It continues,

In the unlikely event that the wind farm company doesn’t commence substantial decommissioning and remediation works within 12 months of turbines no longer generating permanently, control of the decommissioning fund or other financial security should be given to the landowners or to an administrator as agreed between the parties to complete the decommissioning.

What if the Operator goes into liquidation? This is perhaps one of the major potential risks of entering into any wind farm agreement. If the company that you enter into the agreement with (or its successor if they sell the rights) goes into liquidation, then there may be insufficient funds to de-commission the plant, and therefore the items could be left in place, potentially in a state of disrepair. If the equipment had value it would probably mean that it would be removed. There is a real risk however that useless equipment could be left on the property at the end of the Lease.

Others add that landowners have no title over abandoned wind farm material and can’t even sell it to defray their own clean-up costs.

As mentioned above, WA’s power and wind farm operator, Synergy, is state-owned. It has just reported a $657 million net loss for 2018-19 (you read that right), the biggest loss in history for a WA state body. Why? Because the WA Labor government won’t let Synergy put up its prices to households by a necessary 7 per cent. Instead the politicians mandate only a 1.75 per cent rise to save their political hides. “We’ve made it clear by our decisions that we’re not going to allow electricity prices to spiral out of control,” said resources minister Bill Johnston, practising Labor pea-and-thimble economics.

He that troubleth his own house shall inherit the wind:
and the fool shall be servant to the wise of heart.
-Proverbs 11:29

Wind farm guidelines vary among states. The NSW 26-page guidelinesgives only a four or five paragraphs to decommissioning, emphasising that the operator — not the landowner — is responsible for site rehabilitation.

The federal government in 2015 created a quasi-community ombudsman over wind-power contracts. National Wind Farm Commissioner Andrew Dyer, whose tenure expires in 2021, has 1.5 staff plus an office assistant, but no powers other than to help parties reach agreement. So far he’s handled five complaints from residents about decommissioning.

Dyer says in his latest annual report: “Ultimately, the landowner is usually liable for the payment of outgoings in the event the wind farm operator defaults.” He says it’s “imperative” that the farmer protects himself concerning decommissioning, such as requiring the operator to have bank guarantees, a sinking fund, a trust fund or a deposit held by the landowner.

Farmers can be dazzled at the prospect of on-going revenue from towers, and decommissioning is a detail way out on the far horizon. An unlicensed “wind farm prospector” persuades a cluster of farmers to sign up and then sells his “tenement” to a wind farm operator. The dirty tricks employed by some ‘prospectors’ would make a snake-oil salesperson blush. These sign-ons are just the first stage in an often unhappy journey by farmers in unequal negotiations with deep-pocketed operators and their numerous sub-contractors. Deals involve secrecy clauses as well.

So what do farmers get per turbine to offset their risks? The Clean Energy Council itself has spilled a few beans,

Hosting five wind turbines for the Capital Wind Farm near Lake George in New South Wales has made it possible for Peter and Bev Keatley to stay on their property and make it viable to one day pass on to their son. Peter is proud of his role in providing clean energy, and calls the wind farm income – $10,000 per turbine a year – ‘my super’.” (Note: This wind farm, operating since 2010, has 67 turbines of 2.1MW each).

In mid-2015, graziers Clive and Tina Gare at Hallett, SA, told Senate Estimates that they’d been getting $200,000 a year since 2010 for hosting 19 turbines of 2.1MW for AGL, i.e. $10,500 per turbine. Their literal windfall totalled $1m at the time and presumably nearly $2m by now. But the ‘unbearable’ turbine noise destroyed their health and lifestyle, they testified, even after massive extra insulation of their farmhouse. “I will probably just go slowly deaf,” Mrs Gare said.

Senator LEYONHJELM: If you had your time over again, would you host a wind farm?

Mr Gare: No, absolutely not. If I were a rich man, I would not have a wind farm on my property… but unfortunately I am a farmer and there are not many rich farmers around.

The decommissioning issue will generate a new set of horror stories in the decade to come. Co0unt on it.

“Fun Fact 6” from Synergy Is that “Wind could power the world”, this estimable goal requiring a space for turbines “just slightly smaller than Spain”.(Or closer to home, two-thirds the area of NSW).

[2] Previous board roles include Chairman of the Telecommunications Industry Ombudsman Council and serving on the boards of the Transport Accident Commission, Grampians Water and the East Grampians Health Service.

[3] The loss was largely from consequent asset writedowns. Synergy lost $5m on a cash basis.