NASA Climate Change have an account on Facebook where they regularly update their followers with the latest news and research re. the ‘climate crisis’. Today they posted this article about a new pat on the back accuracy study, with this caption:

Study: NASA’s estimate of Earth’s long-term temperature rise in recent decades is accurate to within less than a tenth of a degree Fahrenheit, providing confidence that past and future research is correctly capturing rising surface temperatures.

It’s not that I mean to wind up climate experts, but, following Paul’s post, I thought I should just dutifully mention that other global temperature dataset, derived via state of the art satellites designed and put into space by NASA, which unfortunately does anything but confirm that the earth is warming in accordance with climate model predictions. This seemed to upset the little man or woman hiding behind the NASA Facebook account:

This was their sharp reply: 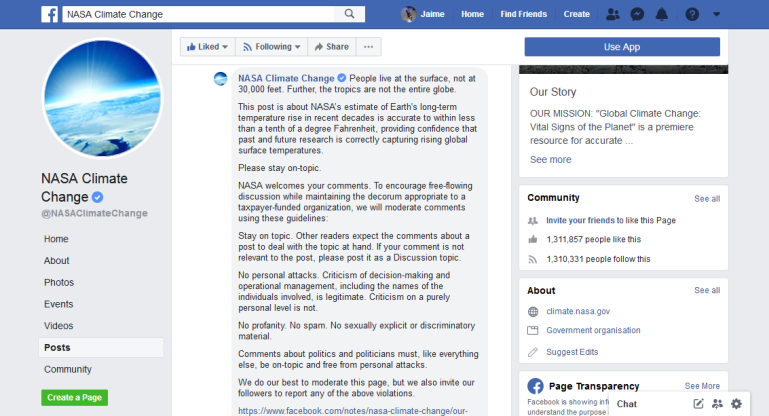 Somewhat irritated myself by such a ridiculous response, I then left this comment:

I think this just proves that NASA are not interested in any scientific debate about the causes of the increase in global surface temperature which their thermometers ‘accurate to within a tenth of a degree Fahrenheit’ so lovingly and precisely reveal. Quite obviously, they will threaten to censor any comments they feel which are not ‘on topic’, i.e. comments which call into question the anthropogenic global warming dogma.