This post summarises some of the lies associated with the recent Harvey et al paper. There’s also a request for reader input! See bold italics below.

I had a quick look at two of her papers.

This 2007 paper mentions polar bears, including this figure:

There’s also a 2003 paper that again is not primarily about polar bears, but includes this: 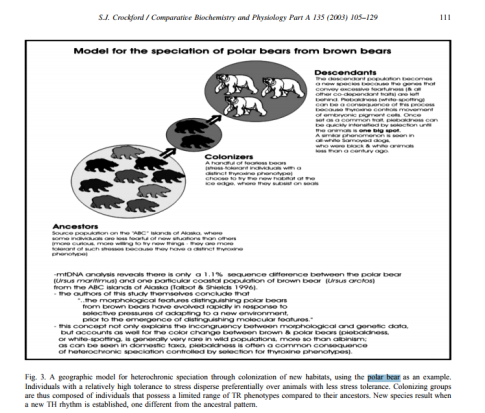 Reader exercise: Can you find other papers by Crockford that discuss polar bears?

2. Amstrup lying to Motherboard about Crockford

Then there’s this, from one of the senior authors of the paper, Dr Steven Amstrup, from a Motherboard article on the story.

Crockford says in her recent blog post “I wrote Motherboard and asked for clarification that this was indeed what Amstrup said because I know it to be a lie. Check for yourself using the search function on my blog, it’s easy to do. I have never used any of those terms to refer to anyone, let alone a fellow scientist.”

Note that Amstrup’s follow-up is also a lie. If he had meant to refer to the “climate denier community as a whole” he would have written that. He expicitly said “her material”.

3. Lying about Crockford and others in the paper and in the SI

The text of Harvey et al claims that Anthony Watts denies AGW, which is untrue. It also falsely claims that Crockford’s blog is “AGW-denying”.

Bart Verheggen has released a list of the blogs used, which confirms Tom’s point about the circular reasoning (“Their evidence is that other unidentified blogs that the paper’s authors call ‘denier’ blogs link to Dr. Crockford’s weblog”). Verheggen’s file labels the blogs of Ridley, Lomborg and many others as “AGW denying blogs”.  This is of course a lie. Anyone can look at Lomborg’s web page and see that he says “For more information about global warming, you might visit the website of the 2007 Nobel Peace Prize winner research institute, the IPCC”. A glance at Lomborg’s Wikipedia page can also confirm that he “accepts the reality of man-made global warming”.

Bart and his co-authors cannot pretend that they did not know Lomborg’s view on global warming. Bart Verheggen, or whoever it was who drew up this list, you are a liar.

Reader exercise: For others on the list labelled as AGW denying blogs, find clear evidence that they do not deny AGW, as I have done here for Lomborg.

If you spot other examples of lies in the paper, in the SI or from any of the authors elsewhere, please put those in the comments too.

Barry in the comments finds clear evidence that Bishop Hill (Andrew Montford) is not an AGW denier, so Harvey et al lied about him as well.

As well as the lies, there are some silly errors in the SI file. The Daily Caller is listed twice. Jim Steele’s sceptical blog is wrongly put in the alarmist section.