Potemkin village (noun): Something that appears elaborate and impressive but in actual fact lacks substance

Will the delegates, and their attendant and alarming advisors and lobbyists, shortly heading for the COP21 in Paris, be so crisis-driven that they will brush calmer and more broadly-based viewpoints aside?

Is the political momentum of the CO2 scare bandwagon still large, despite the wheels nearly coming off at Copenhagen in 2009?

A great deal of effort has no doubt been expended to get it back up to speed, but the omens for Paris make me expect no more than desperate searches for enough political compromise to keep this disgraceful show on the road.

The zealots will presumably be praying for those rising temperatures which they bigged-up so dramatically with that example of shoddy science, the MBH hockey-stick plot. For recent insights into some of the vested interests, see for example this article at WUWT, this one at The Stream, and elsewhere on this blog: Can of Worms Part 1 and Part 2.

A great deal of substance is missing from the cries of the zealots about weather extremes – their latest ploy given the lack of global warming for the past 20 years or so. Even the politically-driven IPCC has been reasonably clear in places about the lack of suitable evidence. Roger Pielke Jr has noted several relevant remarks in the 2013 AR5 WG1 report:

“Overall, the most robust global changes in climate extremes are seen in measures of daily temperature, including to some extent, heat waves. Precipitation extremes also appear to be increasing, but there is large spatial variability”

“Current datasets indicate no significant observed trends in global tropical cyclone frequency over the past century … No robust trends in annual numbers of tropical storms, hurricanes and major hurricanes counts have been identified over the past 100 years in the North Atlantic basin”

“In summary, there continues to be a lack of evidence and thus low confidence regarding the sign of trend in the magnitude and/or frequency of floods on a global scale.”

Thus the IPCC has acknowledged a dearth of good climate data to support conjectures about such climate changes. Meanwhile, on the global mean temperature front, we are now hearing of efforts by some to tamper with historical records in what looks awfully like policy-led evidence-making. See for example this report of work by Professor Ewert this year.

The longest instrumental record we have of temperature is the Central England Temperature (CET) series, currently in the hands of the UK Met Office. The pioneering climatologist Hubert Lamb found it had some merit as a proxy for global temperature variations. Here is an extract from a very informative pair of articles on one of Lamb’s books by Paul Homewood:

‘Lamb believed the CET was indicative of global temperatures:

“From the parallelism with the curves representing widely separated regions of the earth, and the near agreement between the annual curve and the sequence of 5 year mean temperatures averaged over the whole world from 1870-1969, it seems that the changes in England of temperature have probably been a fair approximation to the average of the whole earth.”’

The CET series has been occasionally re-analysed. In 2010, the theoretical physicist, Luboš Motl looked at rates of change and found these results:

‘In the late 17th and early 18th century, there was clearly a much longer period when the 30-year trends were higher than the recent ones. There is nothing exceptional about the recent era. Because I don’t want to waste time with the creation of confusing descriptions of the x-axis, let me list the ten 30-year intervals with the fastest warming trends: 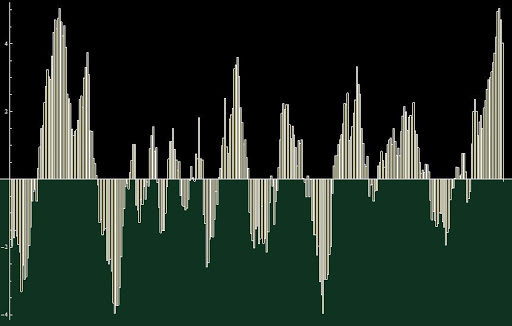 … where the vertical axis is in degrees C per century, and the horizontal spans the CET period up to 2009.

He concludes with a bit of a big leap (but one consistent with Lamb’s conjecture about the CET):

‘The Central England data show nothing unusual about the evolution of current temperatures. And because there is really nothing special about Central England, it’s reasonable to expect that no place in the world is experiencing anything unusual in the modern era, in comparison with other epochs since 1659.’

A more recent analysis of the CET series by Tony Brown in 2015 also finds no evidence of anything extraordinary going on in the 20th and 21st centuries.

The CO2-scaremongering does seem to me to be like the proverbial Potemkin Village: fancy exteriors behind which there is nothing much. The outstanding journalist, Donna Laframboise is already on to this. Her books in 2011 and 2013 have looked behind the facade of the IPCC and its longest-serving chairman Rajendra Pachauri, and what she found there is, to say the least, unedifying. A few days ago, in an article very relevant to this post, she concludes with these words:

“There are many personality types out there. Some people need drama. They enjoy scaring the kiddies, denouncing sin, and threatening non-believers with hellfire and damnation. Life apparently isn’t rich enough for these souls; they need to imagine themselves participants in humanity’s “defining moment.”

“But the most non-renewable resource of all is time – that finite portion allotted to each of us here on this dazzling blue and green sphere. Life is short. We mustn’t let the doom mongers and drama queens dominate too much of it.”

Hear, hear! I look forward to the day when the work of calmer and more knowledgeable people gets the attention it deserves. But that, I suppose, will not be at COP21.  The delegates there will be far more concerned with images – their own, and their imagined world of CO2-driven disaster.