The climate conversation has been proceeding at a breathless pace since 1988 (a rather arbitrary starting point, but… whatever). The warming period of 1975-1998 was unusual and worthy of discussion. The idea that humans contributed to some portion of that warming was just common sense, given the rapid pace of industrialization.

But the warming achieved by 1998 has not slowed human progress in any field in the twenty years since. We grow more food, live longer and healthier lives, make more money, use a lot more energy, have more air conditioning, etc. etc. etc.

Nor do the projected natural effects of climate change show any signs of appearing. Sea level rise, temperature rise, storms and droughts all seem to follow the basic schedules they had prior to 1945. With only 82 years left in the century it would seem appropriate for those projections for 2100 to be revisited.

Instead of a sober assessment of the state of climate affairs, it seems to me that much of the consensus community has spent the last few years air-brushing the concept of atmospheric sensitivity out of the photograph, focusing instead on concepts like representative concentration pathways that start with the end result and work backwards and have baked in high levels of sensitivity in the background.

Now it could be that our planet is in the same situation as those ads I see on lots of internet newsy sites: “26 pictures taken seconds before death,” that show someone (almost always an attractive young woman) smiling on a cliff. Some day I’ll click and find out what happened to her. We could be on the edge of a ‘tipping point’, which if we pass beyond will lead us to disaster.

The conversation about tipping points for the planet ebbs and flows, typically starting with some NGO distorting the findings of a research paper examining potential impacts of global warming using a model. This has led to artificial lines in the sand like 350 ppm concentrations of CO2, 2 degrees of warming, etc. This stimulates sympathetic media coverage which lasts until more sober scientists point out the unrealistic nature of whatever point it is. 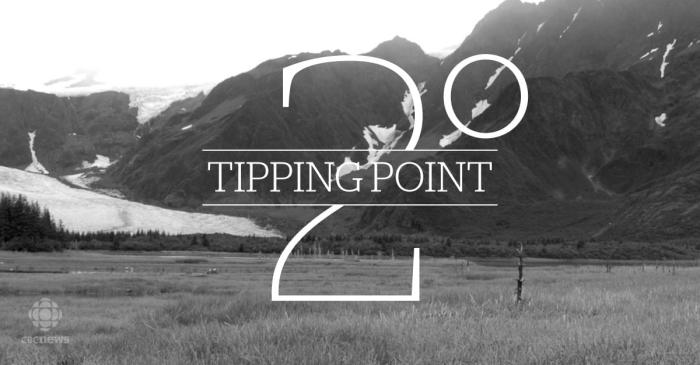 But it seems only rational to also start examining some of the basic premises that led to projections of five feet of sea level rise by 2100, etc. The effects of 20 consecutive years of relatively high temperatures have been remarkably benign.

When does the disaster start?

The Intergovernmental Panel on Climate Change estimates that (assuming an atmospheric sensitivity of around 3C) around 2040, we will start experiencing some negative effects of climate change. This will, according to the IPCC, quickly outweigh the benign to neutral effects of warming experienced to date.

Although I think sensitivity is actually around 2.1C, I take their point–if it gets warm enough we will experience some damages as a result. And I, unlike some of you readers, think we should take steps to counter warming and prepare for its effects.

But as I may have mentioned once or twice over the decade that I have been following the climate conversation, hysterical and exaggerated claims of current effects of climate change alienate many and bore many more. Those claims make it less likely that we will do what we need to do to combat a mid-level problem that we could, if we started today, turn into a fairly minor annoyance.