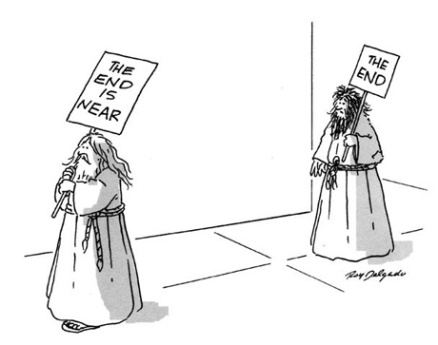 On the scale of problems facing humanity over the next 100 years climate change should pretty much be near the bottom of the list. Continuous over-hyping of impending doom has caused incoherent action to be taken too early, which can only damage western economies and must ultimately fail. Unlike any previous environmental scare, climate change is a perfect storm because there can be no simple solution to what is in effect a long term existential problem involving life itself. The 20% oxygen and 0.04% carbon dioxide in the atmosphere is determined by life on earth. Metabolism of carbon consumes oxygen producing carbon dioxide which is then photosynthesized by plants. Oxygen accumulates through buried carbon sediments, a very small percentage of which are fossil fuels. By increasing CO2 levels to 0.06% humans may slightly modify the net heat flux to space, but whether this is actually ‘dangerous’ or not is not at all clear. The IPCC is still unable to tell us whether climate sensitivity is as low as 1.5C or as high as 4.5C, and this range hasn’t changed in 36 years1! Yet climate sensitivity is crucial to decide if and when any action should be taken.

Climate change will remain a minor problem if climate sensitivity lies below ~2.5C, leaving plenty of time to plan to resolve it. Activists continuously lobbying to decarbonize the economy are simply playing the Devil’s advocate and being counter-productive. Every wind turbine built now may ease their consciences and perhaps even line their pockets, but all of those turbines will be abandoned after only 15-20 years. They are the modern equivalent of 60s tower blocks, because they fail to deliver any long term solutions. Europe has already invested ~ €1 trillion in renewable energy, yet the result is that it produces just a measly 4% of total electricity needs. Can it possibly be sustainable to pump in this level of investment every 15 years for such a ludicrously poor result? Technology advances so fast that it always pays to wait until a coherent technical solution emerges before entering a post fossil fuel world.

We humans have always had a preoccupation with end of the world myths and stories. This seems to be because we are the only species who are conscious of our own mortality, so we project our own looming death on to the earth itself. This is true across religions and primitive societies. Furthermore we almost seem to have a craving for ever more frightening imminent disasters. Foreseeing the end of the world has become one of our most perverse pleasures. In the middle ages the apocalypse was an ever-present threat. The Bible made it clear that the world would end, soon, and that Judgement Day would follow. Those who were sure they were going to heaven rather looked forward to this. The church hoped that the horrors of hellfire would encourage the unfaithful sinners to reform their ways.

Religious zealots no longer have a monopoly on apocalyptic thinking. As society has become more secular, so other groups like NGOs, scientists and politicians can now indulge in such scaremongering.  Recent examples include Bird Flu, Swine Flu, GMOs, and various health scares. Mostly though it has been environmental disasters that experts have assured us are inevitable.  Paul Ehrlich wrote in 1968: “The battle to feed all of humanity is over. In the 1970s the world will undergo famines—hundreds of millions of people are going to starve to death in spite of any crash programs embarked on now … nothing can prevent a substantial increase in the world death rate.” In 1977 Jimmy Carter stated on television: “We could use up all of the proven reserves of oil in the entire world by the end of the next decade.”

All such predictions of global disaster have been proved just as wrong as all the end-of-the-world forecasts from medieval religious zealots. Yet there is no sign that these experts are becoming more cautious about their apocalyptic promises. They are on a mission to save us from ourselves for our own good, by lobbying governments on our behalf. It is sinful for us to have enjoyed a good life so now we must pay back future generations for our indulgences. Perhaps this guilt tendency can be traced back to the Christian concept of original sin, and why the West now feels itself responsible for climate change, ignoring the benefits the modern world enables.  The past half century has brought us endless warnings of population explosions, global famines, plagues, water wars, oil exhaustion, mineral shortages, falling sperm counts, thinning ozone, acidifying rain, nuclear winters, Y2K bugs, mad cow epidemics, killer bees, sex-change fish, cell-phone-induced brain-cancer epidemics, bacon cancer scares, and of course climate catastrophe.

Anthropogenic climate change is like a very slow motion disaster movie. It may take one or two hundred years to happen but once it sets in (at least so we are told) doom is certain, unless we repent and mend our evil ways. There is no time left to waste time on debate, according to the BBC and its FOE/Greenpeace advisors. The scientific consensus must be upheld and sceptical voices must be silenced. The consensus agree on an urgent need for governments to impose carbon taxes to skew energy markets to benefit green companies in order to save our future great-great-grandchildren in 100 years time.

We only have to look at how much the world changed in the 20th century to see how ludicrous this argument is. You cannot manage an uncertain future. In 1900 horse transport was universal, except of course for the poor. Farms practiced crop rotation where yields were 3 times lower. No-one took a regular bath and health and sanitation was appalling. Everyone burned coal for heating and the future of transport was steam railways. Did they start fretting and worrying about a future world without coal? Did they imagine that within 40 years there would be two devastating world wars destroying their world view? Or that within 70 years there would be nuclear power, electronics, computers and the Internet. So why do we presume that the 21st century will be any different?

The basic question is whether climate change a real danger or not? We basically don’t know because it all depends on climate sensitivity to CO2 and unfortunately the IPCC still can’t really give us an answer.  We don’t even know for certain what future CO2 levels will be  because the IPCC ‘RCP’ scenarios all assume that the carbon cycle saturates causing an ever higher percentage of CO2 to remain in the atmosphere. This may well not be true.

Scaring young people is immoral. I spent much of my youth being frightened sick of an impending  nuclear holocaust. Did I live far enough away (Bromley) to survive a 10 Mton bomb dropped on London Bridge? Would we survive the radiation fallout if we stayed inside the house for a week? The same nuclear threat still exists today but we just don’t worry about it any more. As a result, I can’t now even afford to buy a 2-bed flat in London Bridge either!

Today it is the same story with climate change as it was 40 years ago with fear of a nuclear war. However there is one significant difference. Nuclear war was then and still remains today a real threat, whereas climate change simply isn’t. Today’s climate zealots are mostly middle-aged or elderly ex-politicians and scientists pushing for drastic cuts to “carbon emissions” onto future generations to save the planet. They know that they will all be long dead and gone before any tangible effects of climate change might come to pass, but they seek redemption now by saving the world, just like medieval religious zealots did.

Are humans part of nature or do we somehow imagine we have become gods able to control the climate? Homo sapiens only emerged 200,000 years ago, and became the dominant species only after the end of the last Ice Age. The climate determined where we migrated and where we flourished. No doubt it will continue to do so in the future. Humans have been on earth for the blink of an eye. The earth will survive with or without us.